Say hello to 'Hero Leap' - India's first ever, 'Made In India' scooter. The vehicle was introduced as a concept design, back in 2012 and formally demonstrated at the 2014 Indian Auto Expo. Hero has confirmed that the two-wheeler will hit Indian roads early next year. The company didn't reveal any information about the price of Hero Leap in India but what we know is that the company's plant in Gurgaon will produce the Leap and manufacture about 6000 units annually.

It looks like the Hero Leap has been designed to target the Indian and international markets at the same time. The vehicle will be powered by a 11bhp PMAC electric motor. In order to make up for the limited range that this machine will deliver on electric power, Hero's including a 124cc petrol engine. There's a 3 litre fuel tank; but no information is available about the capacity of the Li-Ion battery that will power the electric motor. Various information sources suggest that the electric motor will produce 60Nm max torque at standstill. The top speed of the Leap will be about 100Kmph. 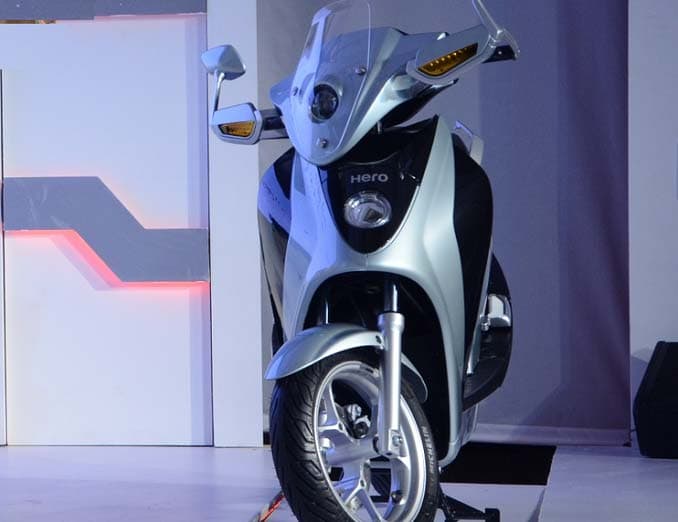 ​
The Hero Leap might be Hero answer to India's Mahindra, which has announced GenZe, the first ever electric scooter to be sold in the United States. We're not sure how popular will these scooters be in India given the perpetual power shortage entire India faces. We look forward to reading your thoughts on Hero Leap.

Kaustubh Katdare
Update: It looks like the price of Hero Leap in India will be about Rs. 90,000 ex-showroom. Would love to have your comments on whether that price tag is justified for the hybrid bike.

You're welcome sir,
About the scooter, the price is not unfair. Honda activa 125 cc with alloy wheels and disk brake recently launched has a price tag of nearly 60000 rupees and this scooter being a hybrid is fair to be priced around 90000 rupees. As far as Indian market is concerned, it's unlikely that a person would spend 1 lakh rupees for a scooter. Personally, I would not.
@Bella Edward • 18 Dec, 2014 when it will be launch in india ?