Kaustubh Katdare · Aug 6, 2013
Rank A1 - PRO
Everyone loves WhatsApp and now you won't feel 'less equipped' than your friends using other rival messaging services like Line, Viber, WeChat etc. WhatsApp is getting push to talk voice messaging feature starting today and it's going to be rolled out on iPhone, Android, Blackberry, Windows Phone and Nokia. According to AllThingsD, the voice messaging has been the secret pet project of WhatsApp CO Jan Koum. Koum wants WhatsApp users to experience how simple they have made the whole voice messaging business. He even demonstrated that using Facebook Messenger App, which requires about 3 taps to send a voice message. WhatsApp, on the other hand, takes only 1. Big thing, folks! 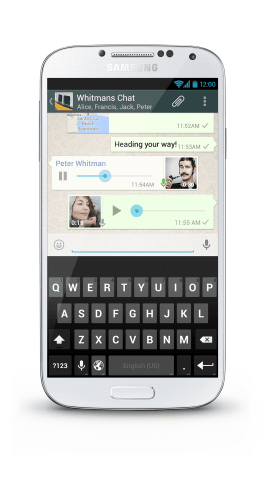 Koum says that the number of taps matter a lot. "People want to send a message and be on their way", says Koum. What's more to WhatsApp's voice messaging feature? Well, there's no limit to the length of the audio you can record. Plus, the volume will automatically adjust when you hold the phone at arm's length or when closer to your ears. Koum says that it's very reassuring to know that someone else has heard your message.

Voice messaging on WhatsApp continued to be one of the most desired features the popularity of the app skyrocketed in the recent times. The messaging service, which already is bigger than Twitter is about to touch about 300 million active users worldwide - not bad for a startup company that started as a very simple idea and now has just 45 employees. The big deal about the launch of voice messaging feature on WhatsApp is that it's launching simultaneously on all the supported platforms. Even the Internet biggies like Google, Twitter or Facebook make the launch first on iOS or Android and then followed by other platforms.

The voice messaging feature will let people communicate more without typing more. The Russian alphabet, for example has 33 letters. When you cramp up everything on a tiny virtual keyboard, it's very difficult to type. Voice messaging will totally eliminate the need to type.

At the time of writing this article the Voice Messaging feature is not available in Google Play India store. We'd request our readers to post their reviews if as soon as you receive updates for your WhatsApp.

We'd also like to ask all our readers what other features would they love to see in WhatsApp? Posted in: #Coffee Room
0 Likes
@ A2A Reply

Kaustubh Katdare · Aug 6, 2013
Rank A1 - PRO
Addendum: It appears that most of the messaging services are on the 'feature ramp-up' road these days. WeChat, one of the top rivals of WhatsApp launched several new features with the version 5.0 update. Read about it here - https://www.crazyengineers.com/threads/wechat-5-0-update-out-whats-new.69723/
0 Likes

Sarathkumar Chandrasekaran · Aug 6, 2013
Rank A2 - PRO
last few days are the war period for messaging apps.Yesterday we had a feed on we chat 5 and now its whatsapp turn to spin the dice.This move can help to retain the present customers but increasing demand for new features make the developers to go crazyyyyyy.
0 Likes

Ankita Katdare · Aug 6, 2013
Rank A1 - PRO
Amazing growth for the app. I for one never suspected this kind of growth for Whatsapp the first time I heard about it. But I am pleasantly surprised. It has been a blast. People were saying that mobile messaging is dying due to Facebook messenger. We had quite a few discussions here on CE as well about the same.
But boy we were wrong.
With push to talk, Whatsapp is now going to see the growth charts pointing way upwards.
0 Likes

Jeffrey Arulraj · Aug 7, 2013
Rank A2 - PRO
Whatsapp is one place where all my friends can be found at any time