The Full Form Of Google You Didn't Know 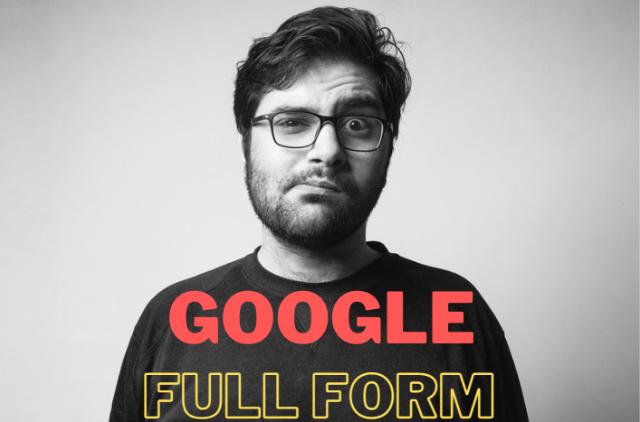 Short answer: Google does not have a full form. It's a word derived from a mathematical term called "Googol", which represents a number - 1 followed by 100 zeros OR 10^100.

If you search the Internet, you'll find that the most common full form of Google is "Global Organization of Oriented Group Language of Earth". But some would argue that the correct full form of google is "Giving Opinion & Options Generously Linked Everywhere".

Which full form of Google is the correct one?

In fact, the right question to ask is - does Google full form even exist? Some say it's a random name or abbreviation created by Google's founders - Larry Page and Sergey Brin.

I've done a fair bit of research on this topic. The most credible answer comes from authors of the book 'Google Story' - David Vise and Mark Malseed. Authors mention that the full form of Google does not exist, and it's a clear misspelling of Googol.

Google does not have a full form

The name Google is derived from the mathematical term "Googol", which represents the number 1 followed by 100 zeros, or 10^100.

Back in 1996, Larry Page and Sergey Brin were Ph.D. students at the prestigious Stanford University. The duo built a web-page crawler that'd visit web pages and extract the information from them.

You could imagine that the amount of information they were extracting from tens of thousands of web pages was vast - and the word Googol was the closest representation of it.

Google has since evolved into a megacorp with several popular products and services like Gmail, Google Maps, Android, YouTube, Google Ads, and several others.

You'd be wondering why is there so much confusion about the full form of Google. Well, you'll be surprised to know the following common terms and their full forms -

Note: All of the above full forms are incorrect.

If someone asks you what is the full form of Google - tell them: Google does not have a full form. It's a name derived from a mathematical term called Googol, which represents a very large number.

For my Hindi speaking friends, if you are wondering "गूगल का फुल फॉर्म क्या है?", let me answer it straight to you.

Let’s understand what the ONDC platform is, its significance in Indian e-commerce, its features, its benefits to retailers, and how to participate in it.

The full form of DNS