@Kaustubh Katdare • 26 Mar, 2014 • 1 like
Meet Tsunamiball - the houseboat that promises to keep you and your family safe from deadly Tsunami waves. Creator of Tsunamiball, Chris Robinson decided to work on this DIY project on his own after the Tsunami hit Japan in March 2011. It all began after a general conversation with his friends on what would their families need if the Tsunami hit his home city of Palo Alto, California. While the work on his project is still in progress, it took Chris about two years to go from drawings to constructing the boat. Here's Chris in his boat -

​
Chris had to build his Tsunamiball on his own and he had no prior experience in boat-building or access to experts. His idea was to develop a tough vessel which would provide the family an abode whenever the disaster strikes. The structure Chris has built is about 22 ft x 10 ft x 8.5 ft and it uses plywood. The main challenge for the boat is not just to float in water, but also be tough enough to withstand the debris that Tsunami waves carry with them. Chris employed a 6.4 cm thick marine-grade plywood for the outer shell. He covered the plywood with an abrasion-resistant polyester material to provide extra strength to the structure and used epoxy for the joints to offer extra toughness. 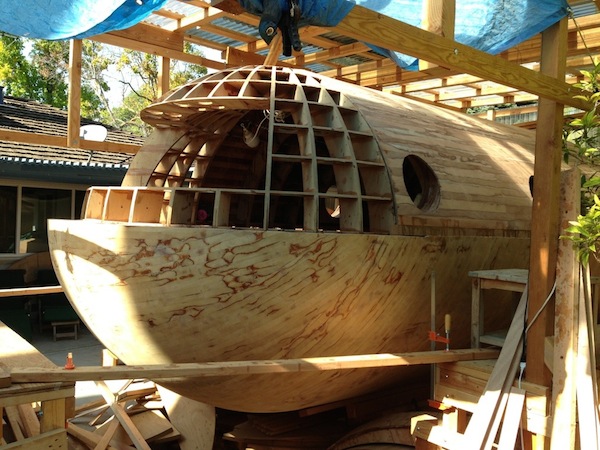 ​
Once complete, the boat will have about 60 layers of wood. The standard screws used during initial trials have been replaced with plastic staples. Robinson plans to derive power for the Tsunamiball from solar panels. The interiors will include benches that will convert into beds. It's expected that the boat will be ready by the end of the year. The vessel will be tested in swimming pool and then in the ocean with the help of a crane. 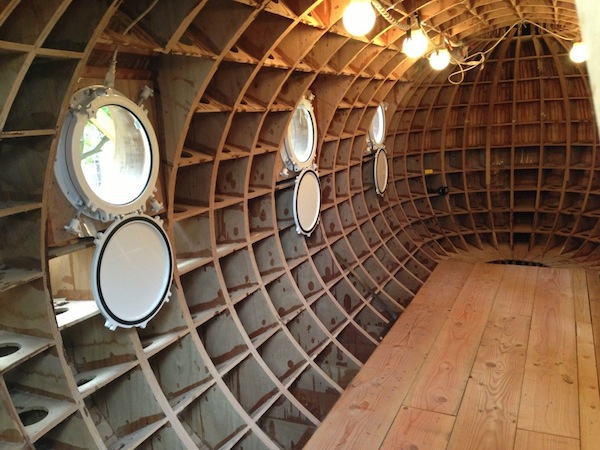 ​
Whether the Tsunamiball will ever serve its master is uncertain; but till then, it will reside in Robinson's garage and act as a guest room. We'd love all our mechanical engineers to visit the source link below and check the official website for the details of the project.

Source: Gizmag
Official Website: Tsunamiball
@Pete Harrell • 26 Mar, 2014 • 2 likes Chris, your design might be structurally survivable, but round bottomed hulls are notoriously bad at seakeeping and roll stability, even with lots of ballast and the addition of lateral strakes or an extended keel. It's for good reason that the most stable ships afloat, the modern aircraft carrier, have square chines and flat bottomed hulls. Cylindrical things in the ocean want to roll, and while the boat itself might survive a massive west coast tsunami, I'm afraid the occupants might not survive if not secured in a harness of some type. At the very least, they would become very seasick even if strapped down and protected from internal missile hazards as your boat rolls violently even in the smallest waves.
Pete Harrell, P.E.
@Tsunami Chris • 28 Mar, 2014 • 2 likes Pete, Thanks for the advice. The round hull makes for easy patterning and even easier spinning, which I will need to do so several times so I can get enough layers on the hull, top and bottom, inside and out.

But I am open to suggestions for finishing the bottom and adding the keel. I was thinking of a pretty beefy steal keel. I'm not shy about hard work, so I could build a square box keel under the existing structure. Might bust my beautiful shape, but it would help solve the rolling problem, and have the added advantage of providing a stable base for the boat when it is sitting in my back yard.

I'll think on it some more, but it sounds like a good idea.

Kaustubh Katdare
@Tsunami Chris - Good to have you on CrazyEngineers. What's your plan to keep the vessel upright and avoid the spin?

Well, my first objective was to provide an impact resistant and buoyant vessel. If the next step is to keep from spinning.. I was planning on adding a big 'ol steel keel and then ballast as I need.

Sounds like maybe there are better options out there, yes?
5.2k views

DIFFERENCE BETWEEN FERRITE AND ALPHA IRON?

WHAT IS THE DIFFERENCE BETWEEN FERRITE AND ALPHA IRON?
4.1k views
Read More →
Archives

It was Dr. APJ Abdul Kalam who gave Indians the vision 2020. By the way, regular public is totally clueless about what vision 2020 is and how different India will...
5.6k views
Read More →
Archives

Happy Engineers Day - is the title of CrazyEngineers' essay competition on the occasion of Engineers Day in India. This thread is meant only for the official essay entries for...
14.5k views
Read More →
Archives