Ankita Katdare · Feb 14, 2014
Rank A1 - PRO
Drawing inspiration from nature, engineers and computer science researchers from the Harvard School of Engineering and Applied Sciences (SEAS) and the Wyss Institute for Biologically Inspired Engineering at Harvard University have developed Termite-inspired robotic construction crew that works autonomously. Nature brings in hundreds of fine example of construction by animals that are awe-inspiring. Termites have been one such species that have known to build complex structure that are of magnitudes larger than themselves. More fascinating than this is the fact that these little termite engineers operate without any central supervision. Engineers across the globe have been striving to implement automation in construction so as to improve speed and efficiency of the process. With the new termite-inspired bots, Harvard engineers seem to have achieved quite an exceptional feat.

Called the TERMES system being worked upon since last four years, here we have a herd of robots working together to build complex, 3D structures without any role assignment or central control system. The robotic construction crew is capable of building everything from towers to pyramids from foam bricks. The applications of such a robotics system are countless. They could be used to create rescue structure in case of disaster struck region or even for performing minute construction tasks on other planets in space. The project's lead researchers include - Don Ignber, Radhika Nagpal, Fred Kavli, Justin Werfel and Kirstin Peterse. 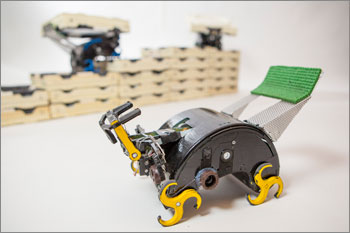 ​
The TERMES project's aim was to build a swarm construction system that works in decentralized fashion to construct a user-specified structure, working from a high-level description as input. It is interesting to note here that drawing inspiration from Termites for this task must have been challenge like no other because they don't work like us with blueprints and a detailed plan of how to execute prescribed directions. There is no queen to feed the individuals with instructions. In fact, each termite is on his own and has little or no idea about what the others are doing or what the current overall state of the mound is.

Termites use a concept called as "stigmergy" - which involves observing each others' changes to the environment and acting on those lines. And this is exacty what the Harvard team has achieved with their robots team. They have had successful results from the robots even in the face of unexpected changes to the structures occurring during construction. Built just fromfour simple types of sensors and three actuators, the termite-inspired bots are now a part of the team's Self-Organizing Systems Research work that brings forth distributed algorithms that allow very large groups of robots to act as a colony.

​
In the past, we have robots inspired from cats, from lizards, from squirrels, cockroaches and even ants. Biologically inspired robots and engineering is growing with leaps and bounds. With the new termite-inspired robots, the TERMES project has been able to have the robots do necessary tasks such as carrying blocks, climbing the structure, attaching the blocks etc. Do take a look at the following video put together by WYSS team -


​
Do share your thoughts and opinions on the new kind of robots in comments below.

In the following video about TERMES project, you can check an example of decentralized algorithms in operation for collective construction. Take a look at their smart algorithm at work -


​
Do you believe that in future we will be seeing the mega-structures being build by fully-automated swarm robotic construction techniques? We would like to know your opinions on this.

Ankita Katdare · Feb 14, 2014
Rank A1 - PRO
Those interested in the project should also take a look at the series of videos about Collective Construction put together by SSR Harvard Lab -

You will see a number of videos where robots developed to work in unstructured environments using compliant materials in action.
1 Like