@Ankita Katdare • 08 May, 2014
Samsung India has launched their much-talked-about Curved and Flat Screened 4K resolution televisions in India today. The Samsung Curved TV range includes - 105-inch Curved UHD TV, Samsung UHD HU9000 and UHD HU8000, whereas the Flat-screened UHD HU8500 is here too. The first of its kind 105-inch Curved UHD TV was introduced for the first time at the CES 2014 event in January. Termed as the "world’s first and largest Curved UHD TV", the television has set the stage on fire with its amazing picture quality and some of the coolest features. With a 21:9 aspect ratio, which is awesome for watching HD movies, the display on this TV features 11 million pixels. The combo of the huge screen size and Samsung’s Auto Depth Enhancer technology is said to bring amazing depth to the picture and thus producing a life-like viewing experience. The price of this unit for Indian consumers is still kept under wraps. 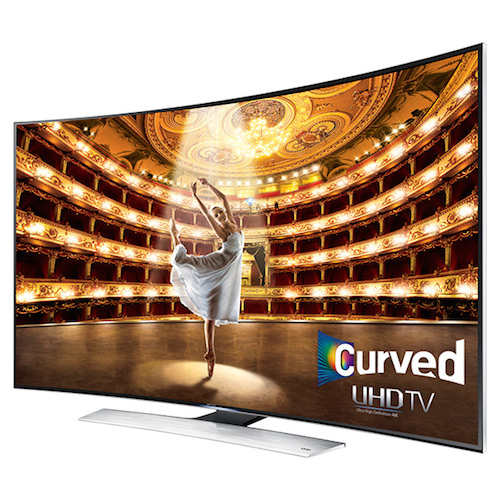 ​
Moving on to the flat-screened Samsung UHD 4K HU8500 Series Smart TV. It comes in 4 sizes : 75 inch, 65 inch, 55 inch and 50 inch. Featuring almost the same features as the curved TV options, in the specs sheet, we find - UHD Upscaling, UHD Dimming, Precision Black Local Dimming and Clear Motion Rate 1200. Designed in Black/Chrome Silver option, this one has a T-shape titan black stand. With packages, you will receive 3D active glasses, remote, IR extender cable, mini wall mount compatibility and a slim gender cable in the accessory bag. Samsung has priced the HU8500 series 65-inch model for INR 4,09,900 and a 55-inch model for Rs 2,93,900.

Samsung’s UHD TVs not only support today’s standards - including HEVC, HDMI 2.0, MHL 3.0 and HDCP 2.2; they are the only TVs on the market that are future-ready, thanks to the Samsung UHD Evolution Kit. The One Connect Box essentially houses the brains of the TV externally, enabling customers to switch out the box. Moreover, the new Multi-Link feature brings contextual multitasking to the big screen, enabling users to split the screen to bring up related content. There is also the Multimedia panel for social networking and Game panel for hard-core gamers' ease and comfort.

R. Zutshi, the Deputy Managing Director at Samsung India believes that the global trend of adopting newer technologies will be adapted by Indian consumers as well. Sharing his optimism about getting a good response in this market at the launch event, he went on to say that this year's World Soccer Cup is something that audience should look forward to watchin on the 4K Curved televisions.

That's all about the newly introduced Samsung 4K UHD TVs in India. What are your thoughts and opinions on the same? Share with us in comments.
@Ankita Katdare • 08 May, 2014 Looking forward to opinions on this one from all engineers around here.
Tagging a few -
@Akash Sood, @micheal john, @prahumac, @Karishma Manwani, @Rajni Jain, @Harshad Italiya, @Sanyam Khurana, @Yogesh Borkar, @Anoop Kumar, @zaveri, @CE Designer @Rachel Caroline @Anoop Mathew
@Rachel caroline • 08 May, 2014 Features are very cool !! the curved design adds an extra spice to it 😀 😀 sure to get a good response
@Kaustubh Katdare • 08 May, 2014 I hope they bring down the prices. I think the right price for the 55" model should be about 1.5L; not more than that, please!
@zaveri • 08 May, 2014 It would have been great, if it had the provision, for connecting a home theater system directly to it, or it does already ? ?
@Harshad Italiya • 08 May, 2014 I just get chance to watch Avatar movie in Curved HD at one of our relative and the experience is amazing.

zaveri
It would have been great, if it had the provision, for connecting a home theater system directly to it, or it does already ? ?

As long as the TV accepts HDMI and has audio ports; any home theatre system should be able to connect with it. I'm curious to know how the upscaling, from HD to UHD works.
@Anoop Mathew • 10 May, 2014 Curved displays look good in person. Not really sure about the 4K resolution part and how much 'view-ably' it'd vary with the current variants.

Spoiler: Sound proofing Required
@Rajni Jain • 11 May, 2014 Who can question SONY and Samsung when it comes to the HD / UHD Tv's. The one given above is an engineering marvel,

However as everyone's saying, i too thing that the price is way too much.

Chinese brand Seiki or TCL are selling the 50+" inches 4K HD TV in less than a lakh Indian rupee; almost 33% of the cost that are marked by Samsung. Even though the Samsung's quality would be better than the compatriots Chinese brand, but still to rule the segment of 50+ inches they need to reduce the price.