Most powerful laser in the world is 'mind blowingly' POWERFUL!

@Kaustubh Katdare • 06 Feb, 2014 • 3 likes
1,000,000,000,000,000 watts - we wrote it, you read it. That's how powerful the world's most powerful laser will be. Research engineers at the Lawrence Livermore National Laboratory aka LLNL have recently received about $45 million in funds to develop a new type of laser system at the ELI-Beamlines facility at Dolni Brezany in Czech Republic. The engineers will aim for the development of what's called HAPLS aka High Repetition-Rate Advance Petawatt Laser System. Once realised, the system will be considered as a major advancement in the high power laser science. The USP of the HAPLS will be its firing rate, which will be about 10 Hz. Each pulse of the laser will be short lived, lasting about 30 femtoseconds. 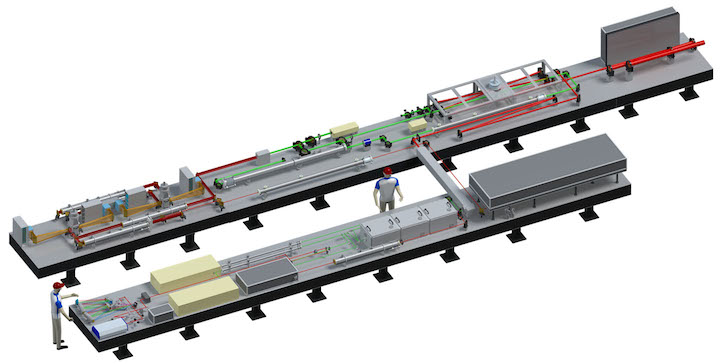 CAD Model of ELI-HAPLS
Image Credit: ELI-Beamlines​
High power lasers aren't new; but this new system will be a game changer. Regular readers of CrazyEngineers VoiCE may remember our article about TWI's 5KW laser gun capable of decommissioning a nuclear plant. The laser gun, with just 5KW of power could cut bare metal assemblies like a hot knife in butter. We also wrote about Boeing's 30KW laser machine that could take aircrafts and flying objects down easily. We'll leave it to your imagination to figure out what a 10^15 watt laser is capable of. We told you, it's 'mind blowingly' powerful!

The project will see contribution from the researchers and engineers from LLNL & Czech Institute Of Physics. The design, development, testing and installation of the system is expected to be complete by 2017. Once ready, the system will be made available to the global scientific community. It is expected to be used mainly for the study of cosmos and pulsars.

Have a look at this official video from ELI-Beamlines that talks about the high power laser project.

After smartphones, now almost every tech company is jumping onto smart wearable devices, many of them focusing on health, nutrition and fitness. We have seen people making New Year or...
7.5k views
Read More →
Archives

Writing the "Career Objective" in your resume

One fresh engineering graduate asked this question to me - "What should be my career objective?", "I need to write it in my resume". I'm very sure each one of...
31.4k views
Read More →
Archives

What is the difference between http and https?

I wish to know the difference between http and https, and why is https recommended over http these days?  We students specially in 11 & 12 class come across various...
19.1k views
Read More →
Archives