@Sharvari Panchbhai • 19 Jul, 2014 • 6 likes
Researchers at Massachusetts Institute of Technology have developed a novel wrist-mounted robot that will aid human hand for carrying out simple day to day activities such as lifting heavy objects, opening jars, stirring coffee by holding a coffee mug, twisting a screw driver, etc. These simple activities are easy to perform using both hands but become difficult to perform single-handedly. 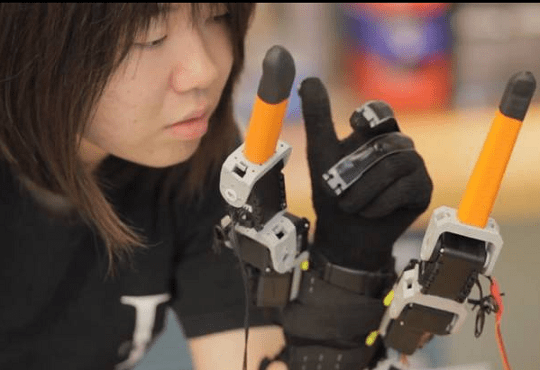 ​
The device works like two extra fingers that are adjacent to the thumb and little finger of the wearer’s hand. The control algorithm makes it possible for the device to enhance human hand’s grasping motion by moving it in sync with the wearer’s fingers while grabbing or holding different objects. According to Harry Asada, the Ford Professor of Engineering in MIT’s Department of Mechanical Engineering, there is no need to give any command to the device to perform this task. The robot tries to learn the natural movements of the fingers and also provide help to the fingers for carrying out a particular task. 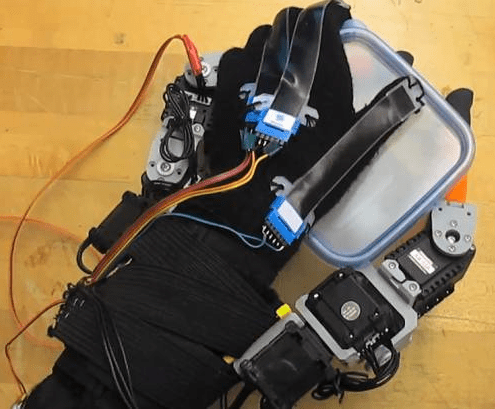 ​
While performing the grasping motion like holding a bottle or any other object, the actuators in the device are linked together to apply forces which have the same strength as those of human fingers. The fingers of a hand are highly coordinated and this bio-mechanical synergy hypothesis proposed by researchers has helped them in developing the control algorithm to move the robot’s fingers in sync with the wearer’s. The two-fingered robot has multiple position-recording sensors. These recordings help the algorithm in teaching the device to assume certain posture that the human wants it to take.

The research team wants to take their work one step ahead by not only controlling the posture of the robotic fingers but also their force. They want their robot to work with small, heavy objects along with slippery objects of same size and shape - where the posture to hold them will be same, but will require different force.

It seems that this new technology will surely help old people or the ones among us with limited abilities to perform the routine tasks. Such a wearable robot will definitely make their daily life easier.


​
Source: Massachusetts Institute of Technology
@Chaitanya Kukde • 19 Jul, 2014 • 1 like Similar? Nevertheless, a boon for elderly or physically disabled people. Only if we could develop a cost-effective version for this...
@megz • 20 Jul, 2014 amazing
3.7k views

i an doing BCA in final year. plz help me in seminar on latest technology related to the computer.
13.5k views
Read More →
Archives

Project Abstract / Summary : Automation or automatic control is the use of various control systems for operating equipment such as machinery, processes in factories, boilers and heat treating ovens,...
4.7k views
Read More →
Archives

What is the relation between pressure and velocity in fluids?

It is a known fact that as the velocity of a fluid increases the pressure decreases accordingly.It can be easily explained for a varying diameter pipe.But for a constant diameter...
40.7k views
Read More →
Archives

With the laws getting stricter, I'm not sure whether ragging is still a part of engineering student's lives. But in my times, the first year would begin with seniors making...
7k views
Read More →
Channels
👨‍💻 Remote Jobs 🗞️ News 🚀 Founders Circuit 🗄️ Archives ✨ Newsletter 🕹️ Changelog
About · Privacy · Terms of Service · Contact Us · © 2005 - 2022 CrazyEngineers. All rights reserved.