Ankita Katdare · Mar 27, 2015
Rank A1 - PRO
A lot of research is happening in the field biomimicing robotics, where bots' design is inspired from elements in nature, be it insects, birds or animals. One such study in flying robots conducted by a team of researchers from Stanford University will leave you baffled. The team has developed biomimetic robotic wings that can be used in flying drones so as to protect them from mid-air collisions. If you are following the research work on flying bots, you must've heard of the world's first intelligent flapping micro drone called DelFly Explorer or the EPFL flybot and the more recent DALER robot that mimics a vampire bat. With the latest research work from Stanford University, these flying drones have to no more worry about colliding with objects mid flight. The new mechanism allows flying robots to easily squeeze between obstacles and fully recover from the hard impacts of an accident.

Inspired from nature, where birds are often seen manoeuvring through complex environments be it branches of trees or a fast current of air, the man made bots had to adapt to be able to fly in practical scenarios. Birds like pigeons morph their wings until they are tucked close into their body, so that they can easily pass through gaps. Stanford researchers have created one of the first mechanisms where the morphing of the wing was did not require any actuation to fold or unfold, ultimately making the wing much lighter and more reliable. 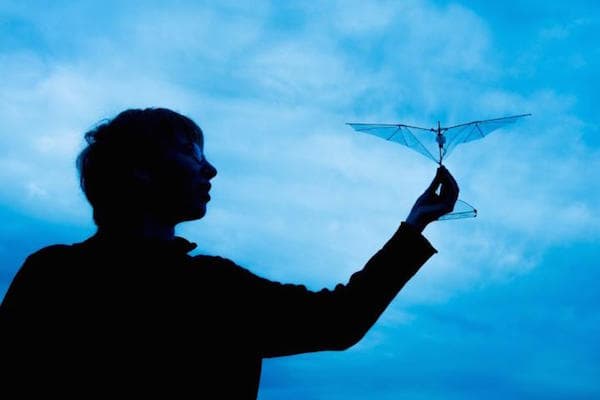 Amanda Stowers, the Graduate student of the Lentink Lab
at Stanford University demonstrating the wing design​
Developed using carbon fibre and Mylar film materials in a 3D printer, the robotic morphing wings have a wrist joint and the pin joint connected the arm wing and the hand wing. The arm wing attached to the body of the robot at the shoulder joint, which initiated the flapping. Just like Origami folding, the wrist joint of the wing was hinged such that, as the rest of the wing flapped, the hand could freely fold and unfold over the arm, on its own i.e without the need of any actuation.

The researchers performed a number of tests that involved physical, theoretical and even numerical simulations on the robotic wing and found that whenever the wing flapped, the folded hand wing was able to unfold back to the full wingspan configuration passively. This is the same as how birds allow for impact with obstacles without affecting the structural integrity of the flexible wing. By adding a passive wrist joint, the flapping wing we have produced can withstand an impact and recover automatically back to its original position.

This research work has made flapping winged drones much more robust than what they are today and is definitely a great step forward in building the flying bots of the future. What are your thoughts on that? Share with us in comments below.