@Kaustubh Katdare • 07 Jun, 2013
Maruti Suzuki is expected to launch the "Maruti Ertiga CNG" in Indian markets to help car-enthusiasts beat the ever rising petrol and diesel prices. While there is no concrete information about the exact launch date and pricing; we believe that the company will formally announce the car later this month. The price of the car is expected to be approximately Rs. 30k more than its petrol varient - which currently is available at Rs. 6 - 8.45 lakh rupees ex-showroom in Delhi. The car will be made available in LXi and VXi versions. Leading auto blogs are reporting that the car could be announced by mid-June.

Maruti Suzuki understands that fuel price is one of the key factors that influences in automobile purchase decisions in Indian markets. With no signs of Petrol & Diesel prices coming down in India in the next several months, the company wants to capitalize on the situation by offering a cheaper CNG version. If successful, the move could give a boost to the Ertiga's sales which have become almost stagnant in the last several weeks. 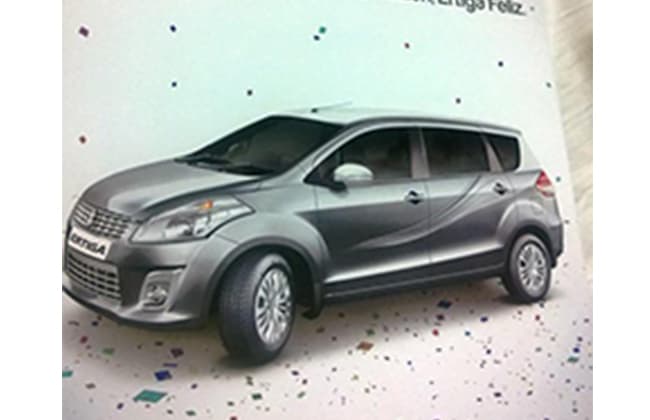 It's expected that the CNG varient will be based off the recently launch Ertiga Feliz. We learn that the idea company is trying to drive is to let users have a choice of two fuels. Modifying the engine and the suspension is a huge task and the company only offers CNG option to cars with Petrol engines.

The ZXi version (top end) may not get the CNG kit option, but we'd rather wait for an official word. For Maruti cars like Alto, WagonR, SX4 and Eeco are the only ones that can get the CNG kit upgrades. We'd surely be following up this update and keep an eye on the official launch.

In the meantime, we'd like to ask our readers their opinion on the overall popularity & usefulness of CNG kits. We'd also like to know first hand reviews of cars that are equipped with CNG kits. Is the upgrade cost justified in the longer run? Share your views below.
@lovebox • 07 Jun, 2013 Although upgrading to CNG is a good option for us, what prevents most people from doing so is the fact that CNG is not widely available, especially in non-metropolitan cities. Petroleum companies could ease out the situation by installing more CNG refilling facilities at their existing petrol and diesel refilling stations.
The other issue with CNG upgrade is that the CNG tank takes up a lot of boot space in the car.
CNG is a cleaner fuel and its higher octane number ensures better performance.
@lovebox • 07 Jun, 2013 Also heard a few days back that Tata is planning to launch the CNG version of Nano soon.
@Kaustubh Katdare • 08 Jun, 2013

lovebox
Also heard a few days back that Tata is planning to launch the CNG version of Nano soon.

Gurjap
Didn't quite understand the above exchange. Nanos "burning on the road"?

There were several reports in the media that some fault in Tata Nano led to burning of the car. I vaguely remember that it was some issue related to the ignition system. Not sure about the cause though.
@Gurjap • 09 Jun, 2013 As in, the car caught fire and burned everybody inside?
@lovebox • 09 Jun, 2013

Gurjap
As in, the car caught fire and burned everybody inside?

I don't remember any human casualties being reported by the media on this issue. Anyways, fires in the car are a serious threat. Can't really overlook that.
@Gurjap • 09 Jun, 2013 Alright, some googling confirms this stuff, and I am in shock. How could the Tatas, known for their scrupulous and solid engineering, let this happen?
3.8k views

Just now a friend told me that CDAC's C-CAT Result is announced today. She has a difficulty in calculating the percentile. Did anyone here take C-CAT 2012? What is your...
5k views
Read More →
Archives

I'm looking for an ANSYS Project. It has to be cool, simple and easy to understand. Looking forward to your responses.
3k views
Read More →
Archives

Hey ppl, I have been selected for thought works coding round. Does anyone have any idea what kind of questions do they ask???
28.6k views
Read More →
Archives

Hello Mechanical Engineers, Me too an mechanical engineer and i have got topics for my final year projects from my friends and i have posted some here.. If you found...
3.3k views
Read More →
Channels
👨‍💻 Remote Jobs 🗞️ News 🚀 Founders Circuit 🗄️ Archives ✨ Newsletter 🕹️ Changelog
About · Privacy · Terms of Service · Contact Us · © 2005 - 2022 CrazyEngineers. All rights reserved.