@Ankita Katdare • 05 Sep, 2013 • 2 likes
India Kawasaki Motors (IKM), the subsidiary of the Japanese company, is here to create much fanfare with the launch of two brand new bikes in India. With the set up of its own exclusive outlets (first one being located in Pune), Kawasaki is all game for capturing the Indian market with its near 1,000 cc bikes. The company has officially launched its signature bike - Kawasaki Ninja ZX-14R, a 1441cc machine and the 998cc Kawasaki Ninja ZX-10R in Pune today. Bearing a price in India tag of Rs 16.9 lakh and Rs 15.7 lakh respectively, the Ninja ZX-10R and 13R will be available in the company's exclusive outlets.

Looking at the Kawasaki Ninja ZX-10R specifications, we find the 998cc in-line four cylinder engine that gives 195bhp and 112 Nm of torque, harnessed by a 6-speed gearbox. If you ride this superbike, you will reach over 100 speeds in just 2.8 seconds and a top speed of 299kph (limited). The bike comes equipped with Sports-Kawasaki Traction Control Kawasaki Intelligent ABS and three power modes - Full Middle and Low. The most interesting change on the 2013 model is the Öhlins-Kawasaki electronic steering damper which changes damping force depending on the acceleration and deceleration of the bike. Coming to the specs of Ninja ZX-14R - there's a 1,441cc in-line 4-cylinder engine which whips out a power output of 195bhp and torque output of 155 Nm. The engine is mated to a 6-speed transmission.

Commenting on the launch, Yuji Horiuchi, MD, India Kawasaki Motors said, "With the positive feedback on our existing models such as Ninja 300 and Ninja 650, I am confident that the new launches will also be accepted by the Indian consumers enthusiastically. India is an important market more us and which is why we have brought the latest and the best of Ninja's portfolio in the country. We are optimistic of introducing 1-2 launches of this stature every-year." 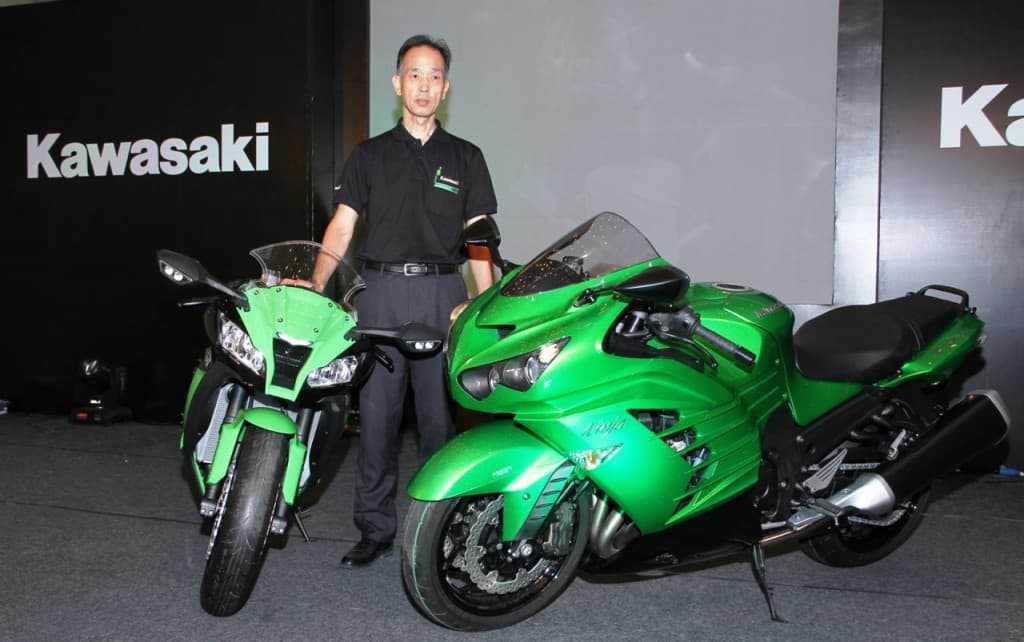 These high-end Ninja motorcycles could very well become a part of Kawasaki's growth story in India. Though the bookings for both of these vehicles are opening tomorrow in Maharashtra, the sales in other states will begin later as the company wants to to make ensure adequate staff training before selling resumes across India. The bikes will start getting delivered in late September 2013. So, those residing in and around Pune can visit the Kawasaki outlet at Wakdewadi and catch its launch on 7th of September.


​
@KSS Manian • 05 Sep, 2013 Hope, this is Very helpful informations for the millionarie, those who dont know, how to spend the money?.... People like me, can buy a car instead of throughing 16L in this bike.... In my bike I can't touch the 5th gear in this traffic. 😉
@Rohit Nair • 05 Sep, 2013 Ya.. this is impressive with the hirearchy of Kawasaki...
@Ankita Katdare • 06 Sep, 2013 The different revisions made to the Ninja ZX10R model are amazing. The 2011 ZX-10R underwent major overhaul both mechanically and visually.
The S-KTRC (Sport Kawasaki Traction Control) system is responsible for predicting when traction will be lost and adapting accordingly.
Also the KIBS (Kawasaki Intelligent Braking System) as their optional ABS system, a completely new design, adjustable foot-pegs, larger throttle bodies, a horizontal rear suspension, lighter three-spoke wheels, Showa Big Piston Fork (BPF) front suspension, and an LCD panel dashboard -have been added to the model since 2011.

The 2012 model is identical to the 2011 with the only exception being the slightly different paint schemes offered.

In 2013 the models went under another small revision where the colors offered changed again and the front dampener was replaced with an Ohlins electronic front steering dampener.
@Sarathkumar Chandrasekaran • 06 Sep, 2013 All of us are waiting to see a perfect launch where kawasaki ninja overtaking Suzuki's hyabusa.At a price tag of 15 Lackhs Suzuki Hyabusa definitely pose a threat to ninja.Both have nearly same top speed and attain 0-100 km/h in less than 3 seconds but Still Hyabusa has edge over Ninja in my point of view.
7.7k views

Hi..I have thought upon a project named remote access monitoring. This project is based upon client server architecture where there are number of clients and one main server. Server can...
21.1k views
Read More →
Archives

Any business ideas for mechanical engineers in India?

I never fully understood the concept behind not sharing ideas for the fear of them getting stolen, when you yourself are going to do nothing about it for lack of...
39.5k views
Read More →
Archives

hi sir i want to organise some intersting and new events in my college technical event which was going to held on feb so please give me some ideas about...
11.6k views
Read More →
Channels
👨‍💻 Remote Jobs 🗞️ News 🚀 Founders Circuit 🗄️ Archives ✨ Newsletter 🕹️ Changelog
About · Privacy · Terms of Service · Contact Us · © 2005 - 2022 CrazyEngineers. All rights reserved.