@Kaustubh Katdare • 30 Mar, 2015 • 1 like
Chinese engineers seem to be getting their new mega-project ideas from Isaac Asimov's books. According to ET, China is planning to build a mega solar power station at an altitude of 36,000 kilometers above the ground to cut the smog and greenhouse gases while solving the energy problem. If China manages to build the power station of the scale it's planning; it will be bigger engineering project than the entire Apollo Program and even the International Space Station.

The original idea of the project was floated by Asimov in his 1941 fiction titled 'Reason' in which the space station collects and transmits the solar energy back to the Earth using microwave beams. Wang Xiji an academician from the Chinese Academy of Sciences has said that Asimov's fictional work always had a scientific base. Wang has dedicated nearly five decades of his life to space technology research and says that the project would be really huge with each solar panel reaching about 5-6 sq.km; about 12x the the size of Tian'anmen Square in Beijing. People would be able to see the power station in the Sky with naked eyes at the night like a star. 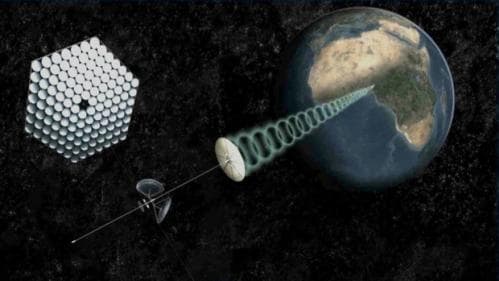 The main challenge in realisation of the project would be deployment of the solar panels in space. Setting up a 10,000 tons of infrastructure in space would required several hundred trips from rockets. While Wang is quite optimistic about space power technology, we'd love to collect ideas from our fellow crazy engineers whether they see future in it. We look forward to your views and opinions.
@Ramani Aswath • 30 Mar, 2015 Generating the power is a cinch. Beaming it down is the nub. Geostationary mechanism, energy density (and associated hazards) of the microwave beam, orienting the beam, reception and conversion are major techno challenges. Still, a monumental concept.
@Ankita Katdare • 30 Mar, 2015 • 1 like Out of curiosity, I googled about the list of solar power stations in the world and found that Spain has the most of them, with more than 25 fully operational power plants set up.
The 392 MW Ivanpah Solar Power Facility, located in California's Mojave Desert, is the world’s largest solar thermal power plant project currently in operation.
In India too many solar power plants have been commissioned since 2011, majorly in Gujarat and Odisha, followed by Rajasthan and Tamil Nadu, but only a couple of them are operational till date.

I guess the major problem lies in the availability of land.
Dedication of land area for exclusive installation of solar arrays might have to compete with other necessities that require land.
As per wikipedia, We need 250 acres for every 20–60 MW generated. That's huge!

All we need to do is constructing 50 meter high pillars at suitable distances on both sides of the highways and mount the platform as a top cover for the roads on those pillars to keep solar panels.

This platform can also be used to collect and distribute rain water.

This can be done in Kilometer-wise units and each unit can be operational independently to be plugged in. Certainly this is not going to be as costly as constructing the power station in the space.

My two bits of crazy idea for the members to consider and comment. Comments and feedback are welcome.

What to opt for post graduation after b.tech CSE

hey friends! Finally joined community and now I am a member. I am in 3rd year of my computer science degree and have been looking at your site for guidance...
7.5k views
Read More →
Archives

mam, plz tell latest IES syllabus for electrical branch...also tel what it takes to crack this exam? Should we keep attempting it in the hope of cracking it?
19.1k views
Read More →
Archives

Intex Aqua i4+ Priced At Rs. 7600 In India Is The New Android This Year End

After a series of smartphone launches in 2013, Intex Technologies - the Indian smartphone brand is looking to end the year with another one. Today, Intex has unveiled a new...
7.6k views
Read More →
Archives

The tower under construction at Mumbai, if completed by 2016 stands a chance to become the world's second tallest building; while the top rank is still claimed by Dubai's Burj...
6.1k views
Read More →
Archives

Your first job: With a Startup or MNC?

Most of you have had a job offer when you graduated. Or those who are studying, will have multiple rounds of campus interviews. Working for a startup or MNC has...
3.1k views
Read More →
Channels
👨‍💻 Remote Jobs 🗞️ News 🚀 Founders Circuit 🗄️ Archives ✨ Newsletter 🕹️ Changelog
About · Privacy · Terms of Service · Contact Us · © 2005 - 2022 CrazyEngineers. All rights reserved.