Kaustubh Katdare · Aug 25, 2014
Rank A1 - PRO
While most of the speed experiments are focused on ground and air; the Chinese engineers want to break speed records under water. The latest super high speed submarine prototyped by the team of engineers at the Harbin Institute Of Technology makes it possible to travel underwater at never imagined before speeds. Li Fungchen, professor of fluid machinery and engineering at the HIT informs that the technique is called 'supercavitation'.

Supercavitation isn't an entirely new technique per se. During the cold war, the Russians had developed VA-111 Shkval, a torpedo capable of traveling underwater at the speeds of 370 kmph using supercavitation; and continues to be one of the fastest torpedos till date. Supercavitation is about forming a wrapping air bubble around the torpedo to minimise the direct contact of the body of vessel with water, in order to minimize the drag offered by water. Theory suggests that a supercavitating vessel can reach the speeds of about 5,800 kmph; allowing travel-time from Shanghai to San Francisco cut short to just 1.5 hours. 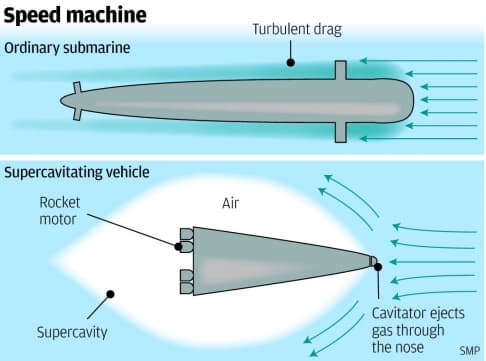 ​
The main issue with the supercavitating vessels is that it's difficult to maneuver them. Also these vessels need to be launched into the water at the speeds of about 100 kmph to maintain the cavitation. The Chinese researchers have succeeded in addressing both these problems. They found out a way to cover the vessel with a specialised liquid membrane allowing a very controlled friction between water and vessel body. It also allows to take care of the challenges associated with high-speed launch required.

Li Fungchen said they need to solve several problems before these vessels can be adopted in the mainstream. The biggest challenge now is to develop an underwater rocket engine that can sustain longer range. The Shkval torpedo could travel only between 11 - 15 km under water.

While the technology and engineering behind supersonic submarines excites us, we wonder what will be the effect of these supersonic underwater machines on the marine life. Do let us know your thoughts!

Ramani Aswath · Aug 26, 2014
Rank A1 - PRO
I want to echo John Keats:
'To what green altar, O mysterious priest,
Lead'st thou...'
When cavitation bubbles collapse they generate Ultra sonics. Maybe there will be an ultrasonic boom underwater. What it does to the delicate sensing mechanisms of the larger sea life is anybody's guess. Plus pollution of a high order at locations currently unpolluted.

I must confess that I am all at sea.
But exciting engineering all the same.
1 Like