@Ankita Katdare • 10 Jun, 2014 • 2 likes
A team of engineering researchers from the Edward S. Rogers Sr. Department of Electrical & Computer Engineering at the University of Toronto has developed a new technology that can lead us to developing really cheap and super-lightweight solar panels, infrared lasers, infrared LEDs and even better gas sensors. If all goes well, this research work on solar technology can help us get rid of the heavy solar panels on our roofs and be a welcome move for glassy and flat solar panels. All this will be possible using the new class of solar-sensitive nanoparticles called as "colloidal quantum dots".

The research team led by post-doctoral researcher Zhijun Ning and Professor Ted Sargent, working at the Dalhousie University, King Abdullah University of Science and Technology and Huazhong University of Science and Technology, is busy collecting sunlight using these tiny colloidal quantum dots. For this they had to study : n-type (rich in electrons) and p-type (poor in electrons) semiconductors. Their studies revealed that when exposed to the air, n-type materials bind to oxygen atoms, give up their electrons, and turn into p-type. As a solution to this problem, the researchers created a model of new colloidal quantum dot n-type material that does not bind to oxygen when exposed to air and did a successful demonstration of the same. 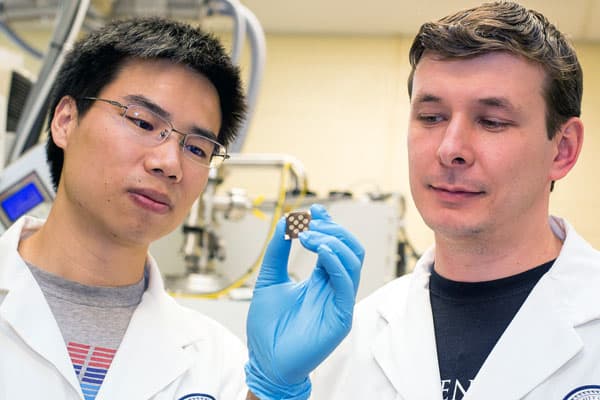 Co-authors Zhijun Ning (left) and Oleksandr Voznyy (right) examine a film coated with colloidal quantum dots​
The researchers are confident that by maintaining n- and p-type layers stable simultaneously, they will be able to boost the efficiency of light absorption in solar panels significantly. Moreover, new optoelectronic devices that take the advantage of the best properties of both light and electricity can be produced. For the common man it means, better weather satellites, satellite communication and pollution detectors. They new hybrid material has increased the solar power conversion efficiency by 8% in their experiments.

The new quantum-dot-based solar cell architecture tech is at a nascent stage. In the near future, we could mix it with inks and paint or print it onto thin, flexible surfaces and lower the cost of solar power, making it easily accessible for thousands of people.

What are your thoughts on the cheaper, lighter and more flexible solar panels? Share with us in comments below.

Source: University of Toronto
@Don_in_Odessa • 10 Jun, 2014 • 1 like Cheaper energy? These days there is a new promise every few weeks. If memory serves, it's been that way since the central Bankers used the oil companies to buy the US Government. I'll believe it when I can go to Walmart and see it on the shelves.
@RVignesh • 10 Jun, 2014 • 1 like We cannot call it cheaper right now. Investing in Quantum dot technology is no way cheap. Similar steps were taken in developing solar cells using silicon nanowires. But the cost involved is very high, problem was not with developing nanowire but with doping. Our CSIR-NPL jointly prepared one such device. You can find that at NPL website.