Slow Internet Connection? You Are Not Alone & Fix Will Take ~25 Days

@Kaustubh Katdare • 30 Mar, 2013
Are you experiencing slow Internet connection since last few days? Have you been cursing your Internet service provider for pathetic quality of service? Well, this time, it's not their fault and you are not alone who's getting 1/10th of your regular connection speeds. In fact, the Internet connectivity in entire South East Asia, Middle East and Africa has been affected and the reason is the broken SeaMeWe-4 (South East Asia–Middle East–West Europe 4) along with damage to IMEWE (India-Middle East-Western Europe) and EIG (Europe India Gateway) undersea cables that connect most of the region to the Internet servers located in the US & UK. It's being reported that the major cause of disruption of the service is the damage to these cables off the coast of Alexandria, that run from Singapore to France. The maintenance work has already began but is likely to take about 25 days to complete. 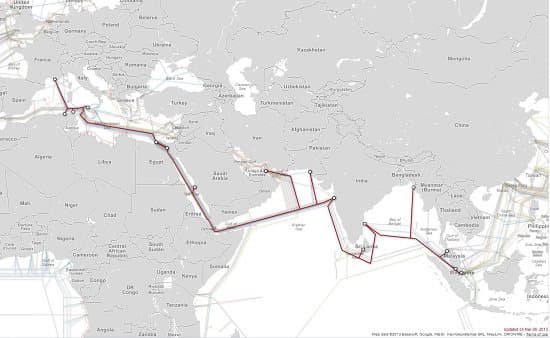 On 27 March, BBC reported that three divers were arrested from the coast of Alexandria who were trying to cut the undersea Internet cable. Further information is not yet available and it's unclear whether the incident is linked to the cables that got damaged. SEACOM, the African telecom company says that the cause of damage is likely to be something else and they're continuing to investigate the issue.

Most of the data and voice communication (~90%) is done through the undersea cables that span several thousand kilometers. The SMW4 cable, for example is 18,800 kilometres in length. The rest of the communication is routed through satellites. India has connected to these undersea cables through a number of ports including Mumbai and Chennai and also has an array of satellites (six apart from INSAT series). This allows the Internet traffic to be routed through other channels and minimise the impact.

Indian telecom companies viz. Airtel, Tata Communications, Reliance and BSNL are involved in the maintenance and operations of these undersea cables. Airtel said in a statement that the voice traffic has been normalised and data services are being worked on by routing the data-traffic through alternate routes. Tata Communications, which is the network administrator of the SMW4 and IMEWE cables has confirmed that the SMW4 cable has been cut.

The maintenance work is in progress, but likely to take few more days. We hope the issue gets fixed and we get back to our regular Internet connection speeds.

Update (2 April 2013) : SECOM has restored the connection. Check the official note from the company below -


SEACOM has completed the process of connecting all customers requiring restoration back into service on the SEACOMcable system link that was cut between Egypt and Europe. All of these services have returned to normal as of 11:47 GMT.

In addition to restoring its own customers, SEACOM has also been able to provide restoration for customers on other East Africa cable systems impacted by the recent cuts.

"SEACOM is pleased to have been able to restore all services for our customers.
We apologise again for the impact these multiple cable cuts have caused over the past 8 days. The work done by the SEACOM team has been outstanding. They have worked around the clock with our global partners to achieve a massive manual restoration task at a time of much disruption in regional cable systems" said Mark Simpson, SEACOM CEO.

@Kaustubh Katdare • 30 Mar, 2013 An observation I made - sites like YouTube, Yahoo and all the communication through WhatsApp seems to be working like charm and so are the websites that are based in India (which is obvious). Google's loading slower than usual but surprisingly Yahoo's faster than ever before. I'm thinking it's the Akamai CDN working in their favor.

What about Facebook, folks? I don't use it, so don't have any knowledge. Front page does load up in < 5 seconds.

PS: I'm on a 2 Mbps Fiber Line.
@Abhishek Rawal • 30 Mar, 2013 25 days ! Sounds to me like 25 years 😡
I don't think that two-three punks who were dps'ing the cable caused this major problem.There outta be something else which hasn't been publicly announced!
@Jeffrey Arulraj • 30 Mar, 2013 Facebook is a bit laggy especially one or two apps are really taking a longer time to load

Other than that Happy with the current performance
@rahul69 • 30 Mar, 2013 I read somewhere that BSNL and Reliance services are not disrupted due to this. Wonder if that's true 😕.
@Sanyam Khurana • 30 Mar, 2013 My net is working without many problems when I talk in terms of speed, but I don't know why it automatically shuts down automatically, then I have to restart it 😭
@Kaustubh Katdare • 30 Mar, 2013

Abhishek Rawal
25 days ! Sounds to me like 25 years 😡
I don't think that two-three punks who were dps'ing the cable caused this major problem.There outta be something else which hasn't been publicly announced!

Well to me every day's going to pass like a year. I'd love to think that the divers who got arrested were actually trying to fix the cable than cut it. By the way, it's not yet clear whether the divers who cut the cable caused all the damage. The matter is still under investigation.

Other than that Happy with the current performance

Have you checked mobile data connection? Airtel has fixed the voice services but data services might be lagging. I'm not sure about Idea Cellular - seems to work fine for me.

Sanyam Khurana
My net is working without many problems when I talk in terms of speed, but I don't know why it automatically shuts down automatically, then I have to restart it 😭

That might be a different problem. Who's your ISP?
@Sanyam Khurana • 30 Mar, 2013 MTNL 😛
@Kaustubh Katdare • 30 Mar, 2013 Just read an interesting article on why we (in India) end up paying more prices of the bandwidth - it's because we don't have more alternate routes if something goes wrong with the undersea cables. Most of the developed nations have setup multiple channels for data communication which can be used as backups in case a cable gets cut or damaged.

I just hope that Indian government will pay attention to these issues in drafting their next infrastructure policy. We need to pay serious attention to the way we are connected to the rest of the world.
@Maratiraju • 31 Mar, 2013 It's a lot better today, Kaustubh 😀 Looks like it's been rectified certainly to a degree. Hopefully, it will stay this way for some time to come 😀
@Kaustubh Katdare • 31 Mar, 2013

Maratiraju
It's a lot better today, Kaustubh 😀 Looks like it's been rectified certainly to a degree. Hopefully, it will stay this way for some time to come 😀

I agree. Almost everything's loading blazing fast today. Looks like they've either fixed the issue or just routed the traffic through different channel. I'll try to look for further information.
@lal • 31 Mar, 2013 I just read, internet is expected to get really 'hit' from today. But it seems things are much better. Some sources say BSNL traffic will not be affected much and they already have a backup, using satellites instead of cables during emergencies (though they haven't started using it though).
@Kaustubh Katdare • 31 Mar, 2013 I'm using BSNL's services and things seem to be back to normal. It was expected that the things would get 'hit' because most of the workforce was on leave on the occasion of Holi. Once the Internet traffic starts picking up after 11 PM, there might be a few hiccups. I'd however hope that things continue to work as they are right now 😁
@Matthias Libot • 02 Apr, 2013 Hey everyone. First of all thank you Kaustubh Katdare for the very informative article on the issue. I am from Indonesia and I have been experiencing very slow connection to Europe for the past few days to a week. All the hype about the DDoS attack on Spamhaus automatically made me think that was the main reason but I believe a damaged cable connecting Asia to Europe has a much bigger impact.

The latest update on the cable repair can be found in. https://www.seacom.mu/news/article-1...ope-is-now-fully-restored-30-march-14-30-gmt/

Which states that the connection is fully restored. Now my main question is that why is my Indonesia - Europe connection still very slow? Does my Internet Service Provider have to specifically choose which cable route they go through to reach Europe (for example SEA-ME-WE-3 or SEA-ME-WE-4 or TWA-1) or does it automatically go through the fastest one?
I have tried contacting my ISP but they are awfully bad at providing these information.

Thanks in advance
@Kaustubh Katdare • 02 Apr, 2013 Thanks Matthias Libot . I'm updating the article to include official note from SEACOM. I believe the ISPs might restore the connections one by one. Currently it looks like Indian ISPs have taken the appropriate actions.

Unfortunately, there's nothing you will be able to do about it. Your ISP should restore your connection today or tomorrow. There's a high chance that there are other issues with your ISP that's resulting into slower connection speed.
@Matthias Libot • 02 Apr, 2013 Thank you for the quick reply Kaustubh Katdare, didnt expect one within 5 minutes of my post 😁.

I am going to need more help in understanding this issue if you dont mind. I have 2 different assumptions right now and was wondering which one is true or whether any of them is true for that matter.

I guess my question can also be boiled down to whether ISP's in Asia have free reign to choose between going through SMW-3 and SMW-4 or do they subscribe/buy the rights to go through a particular cable?

Again thanks in advance as my questions may seem a bit odd.
@Smriti Jha • 08 Apr, 2013 My MTNL hasn't yet recovered fully.
@parminder singh • 23 Apr, 2013 As of on 24th of april i have learnt that all of the damaged cables except SMW4 has been repaired,last one on 20th that is the SEACOM cable. Irony is that i have not seen any improvements in latency time to European servers. I am on high end BSNL plan and did'nt notice an iota of improvement in latency times when EIG cable(only cable partially owned by BSNL) was repaired on 17th april.Its pathetic state of affairs.
9.6k views

As humans, we are naturally gifted to identify patterns when we are shown only a handful of examples. On the contrary, computer systems require huge data sets to be able...
8.5k views
Read More →
Archives

How to identify 4G SIM card?

Idea cellular is sending texts announcing the launch of 4G services and I'm willing to give them a try (before the big daddy Reliance Jionet sets its foot). The latest...
65k views
Read More →
Archives

L&T InfoTech is hiring at various campuses all over India. The integral part of L&T InfoTech's campus recruitment process is Group Discussion. One of the CEans informed me that L&T...
29.3k views
Read More →
Archives

On 21th of this month, I have ISRO exam for electronics. I don't have much knowledge in electronics field. I need your help CE-ans. Question 1. If a counter having...
10k views
Read More →
Channels
👨‍💻 Remote Jobs 🗞️ News 🚀 Founders Circuit 🗄️ Archives ✨ Newsletter 🕹️ Changelog
About · Privacy · Terms of Service · Contact Us · © 2005 - 2022 CrazyEngineers. All rights reserved.