@Ankita Katdare • 12 Apr, 2015
Catching up with the trend of developing self driving cars, two Professors from Gujarat's Amiraj College of Engineering have built their own version of a driverless vehicle in India called "Dextra SMART" – A mobile app based driverless car. With the recent upsurge of self driving cars, most tech giants have been seen joining in the league over the last couple of years. It was Google who first made the world feel awe-inspired about its Self-Driving car. Google’s first prototype was a small two-seater car that has no accelerator, brakes or a steering wheel. The company demonstrated their car's first drive in a video released in May 2014. Let's check out what Gujarat -based college professors have come up with.

The Amiraj College of Engineering & Technology in Ahmedabad hosted an event called 'Dextra 2015' that had various of technical competitions for students from various engineering colleges.
To showcase at the event, Mr. Kaushal Jani and Mr. Nirav Desai, assistant professors from the college developed a new self-driving car. Their team claims that the car was built in a record breaking time of 28 days. Without having a man behind the steering wheel, this car can be made to accelerate, steer, shift gears as well as apply breaks via an app accessed from a remote smartphone or laptop. Equipped with high-range cameras and sensors for object detection, this car uses 3G wireless system for communication. 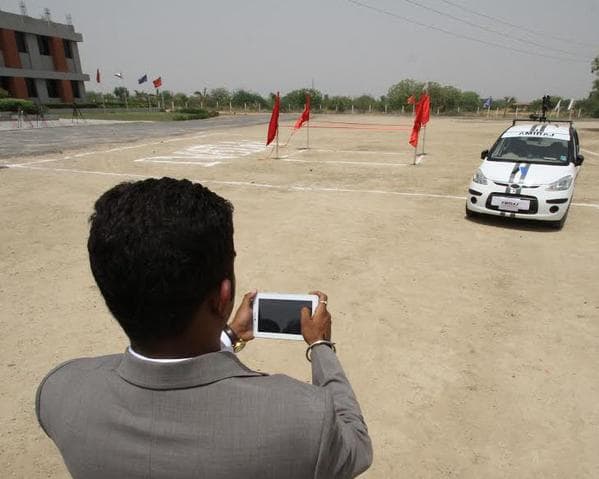 ​
The college officials shared that the technology developed by the professors is being tested for use in other applications and they envision that such an app operated car could find many military applications. Speaking of the tech, we thought of taking you on a tour of the self-driving cars that caught our attention over the last few years. So, here we go -

Starting with Stanford & Volkswagen's Self-Driving Car 'Shelley' that was unveiled back in 2012 and it was in reports for running at 120 mph on a racetrack. Later in 2013, another tech-giant Nissan declared that they were getting ready to introduce a new ground-breaking technology, Autonomous Drive by 2020. Then there were researchers from UNSW Australia working on a self-driving car project in a tie up with GoGet, a car sharing service. Equipped with 4 radar sensors, a video camera and a compact computer, the GoGet car testing had begun back in 2014. From the east, Singapore-MIT Alliance for Research and Technology (Smart) and National University of Singapore co-developed 'SCOT' - a driverless car operating autonomously. We also found projects from Mercedes and Mahindra worth noting.

What are your thoughts on the self-driven vehicle technology? Share with us in comments below.

There are hundreds of VR headsets available for your Android smartphone. You can find cheap ones (Google Cardboards) for around Rs. 250 and more expensive ones like Samsung Gear VR...
12.2k views
Read More →
Archives

I have a business website idea that is more complex than a simple e-commerce site. I am not a "computer person" so I have no idea where to start actually...
4.3k views
Read More →
Archives

How to simulate an antenna?

I need to simulate an antenna for 2.4ghz in 'multisim'. It has models for RF components but i could not find anything for antenna. Is inductance best way of simulating...
3.6k views
Read More →
Archives

Greetings everyone... i am BSC IT graduate 2013 pass out... out of presher from relatives ,parents had to look for job just after my graduation. so i took CCNA +...
3.8k views
Read More →
Channels
👨‍💻 Remote Jobs 🗞️ News 🚀 Founders Circuit 🗄️ Archives ✨ Newsletter 🕹️ Changelog
About · Privacy · Terms of Service · Contact Us · © 2005 - 2022 CrazyEngineers. All rights reserved.