@Kaustubh Katdare • 26 Apr, 2013 • 2 likes
Samsung Galaxy S4 has been launched in Indian markets for a price of Rs. 41,500. People were skeptic about the time-line Samsung would follow to bring the phone to India. You will be able to order the phone online from Samsung India eStore and from Reliance Digital Outlets starting today. The phone was officially announced at the Samsung Unpacked event a few weeks ago. Though the launch event didn't impress many, the features & innovations Samsung's packed inside the S4 are impressive. It won't be wrong to say that the phone rises the benchmarks for the rivals.

There were significant changes made by Samsung's engineers in the phone. The screen size of S4 is now full 5" diagonally and the display is SAMOLED (aka Super AMOLED) at full HD (1080p) resolution. The glass that protects the main display is Gorilla Glass 3 which makes the phone inert to the scratches.

Indian version of the phone has slightly different specs from its US counterpart. The Indian version of S4 runs on 1.6 GHz, 8-Core Exynos OCTA 5 processor and requires 2 GB of memory (RAM). There's a big improvement in the camera systems as well. The rear camera now boasts of 13 MP with zero shutter lag and the front camera is 2 MP and can capture videos in full HD at 30 fps. Of course as with all the phones in the Samsung Galaxy series, there storage capacity of the phone can be extended with the use of micro SD card. The phone itself comes in 16/32/64 GB variants. 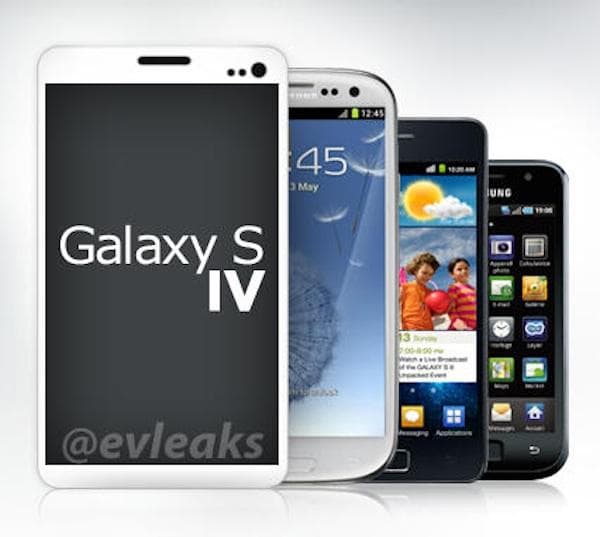 There are ample connectivity options including NFC, Bluetooth 4.0, Wi-Fi, inbuilt IR blaster. The power requirements of the phone are handled by a 2600 mAh battery.

The Galaxy S4 runs on Android 4.2 Jelly Bean and has a latest Samsung built TouchWiz GUI. The fans of TouchWiz will definitely love the improvements Samsung's designers has included in the latest version.

Samsung's done a fantastic job of adding innovative features in S4. Most noteworthy are Air-Gestures, Smart-Scroll, S-translate, Smart-Pause, S-Health & S-Travel. There are few desirable features on the camera as well - the 'dual-shot' mode allows you to be in the picture that you are capturing! There are different 'shot-modes' as well.

The Galaxy S4 raises the bar for everyone. There are several never-seen-before features in the S4 that the industry might be forced to adopt. Looking at the competition, it was well expected that the phone would be priced slightly above Rs. 40k and we believe the price is justified. Samsung's chief rival, Apple will definitely have to work very hard to beat the expectations people will now have from them.

Do you think Apple will be able to beat the S4 with their next phone? Why?
@Kaustubh Katdare • 26 Apr, 2013 Update: Reliance Digital Store might get the phone by tomorrow. As of now, the Samsung eStore isn't accepting orders: https://www.samsungindiaestore.com/ . I hope they'll open in the next few hours.
@Kaustubh Katdare • 26 Apr, 2013 Samsung Galaxy S4 Specs At A Glance -


@Mayur Pathak • 26 Apr, 2013 I'm a bit skeptical about buying a phone priced that high. I wonder why we are still buying phones from Apple and Samsung when the Indian products are available at less than half the price.

I'm using a Karbonn A21 for last 5 months and I must admit that it is fantastic. People still have inhibitions because they say the hardware quality is not that great etc. But it is not true. My phone fell down from a moving auto rikshaw once and took 3 summer-salts before dismantling on the road. I assembled it again and it started working perfectly, save a few scratches on the body.

Anyway, the point it, S4 might have the best of hardware and features. But the phone is tooooo costly for some thing I may use just once or twice. Other phones are 90% good enough.
@Anil Jain • 26 Apr, 2013 Agree with mayur... that cost is high.

PS : Support company like Micromax,Just because they're selling high-end phones at low-cost, it doesn't makes them "China Company".
@Abhijit Dey • 27 Apr, 2013 The reason they charge so much is because of the advertising costs they have to go through while selling their smartphones. Also You could buy these high end smartphones at around INR 15k in America under contract but the same phones under contract in India don't have much difference in the cost.
@Anoop Kumar • 28 Apr, 2013 I agree upon that they spend huge money on advertizing, but only Bill of Materials (BOM) + Manufacturing only can't decide the cost of product.
Where would be the cost of research, innovation and failed product. and over it companies have to cash the brand name and trust.
My guess initial price tag with 32-35K would have a bang price for S4.

Micromax and other small companies have to create their trust and so they are selling at low price. If we see there is no such research or innovation they just copy the others design and feature (I know Iphone 5 also has no innovative feature except design, Apple is just cashing loyal customers.)
@Anand Tamariya • 28 Apr, 2013 Electronics manufacturing cost is not simply the sum of BOM. Designing is an integral part. And, the only way to sell it at an affordable price is by producing it in large numbers. The flip side is if the manufacturer fails to sell as many pieces, they will make huge losses. Just as a comparison, try building a fresh PCB design of blinking LED for less than $10.

If you want functionality, buy Micromax or low end Nokia. But if you are looking for innovative products, S4 is worth the price (mind you people are willing to pay far more than that for far less innovate Apple iPhone 5).
@Pensu • 28 Apr, 2013 I have no issues with supporting Micromax and karbon, but you dont see an octa-core processor phone daily! Yup, they have innovation and if they are presenting something good, they can put the price they want, it's you who should be able to afford it....😉
@Umesh Kumar Rai • 28 Apr, 2013 Samsung has raised the bar for its competitors with many innovative features. Apple must be feeling the heat now and under pressure to launch next iPhone with some other unique features.
@Kaustubh Katdare • 29 Apr, 2013 Found an interesting video from Samsung - how the Galaxy S4 was designed. Check it out -

Note: None of them speaks English. What gives? 😨
@Anand Tamariya • 29 Apr, 2013 Nice video. Glad to see that Samsung is interested in improving user's lives rather than just releasing a new version of it's flagship (ref. iPhone - what's worse they decided to remove GMaps!!).
@Umesh Kumar Rai • 29 Apr, 2013 Nice Video. Its good to see that Samsung has put lot of effort from user's end to improve their lives better.
@avii • 03 May, 2013

Kaustubh Katdare
Found an interesting video from Samsung - how the Galaxy S4 was designed. Check it out -

Note: None of them speaks English. What gives? 😨

What Should be the distance between two electrical earth pits as per standards?
5.7k views
Read More →
Archives

Skoda India has launched a special edition of Skoda Rapid Ultima and it has started selling through the company's dealerships from 1st of March, 2014. The sedan will available for...
4.6k views
Read More →
Archives

How to publish a research paper?

i am M tech student, i want to publish research paper but don't know how? help me by giving your suggestions.
3k views
Read More →
Archives

The Third IdeasEmotion Based Music Player: A music player that presents you a playlist based on yourmood.So when you come back home from office having messed up an assignment your...
5.2k views
Read More →
Channels
👨‍💻 Remote Jobs 🗞️ News 🚀 Founders Circuit 🗄️ Archives ✨ Newsletter 🕹️ Changelog
About · Privacy · Terms of Service · Contact Us · © 2005 - 2022 CrazyEngineers. All rights reserved.