RoboBee - A Flying Submarine Of The Size Of An Insect!

Kaustubh Katdare · Oct 26, 2015
Rank A1 - PRO
The genius engineers at the Harvard John A Paulson School of Engineering and Applied Science (SEAS) have developed 'RoboBee'. The Robobee is a first of its kind miniature robot that can fly in the air and even swim inside water. Engineers have been trying to develop such a machine for decades but with only limited success. However, the SEAS team's achievement has now shown that it's actually possible to create a 'flying submarine'.

The concept of a machine that can fly as well as swim, aka flying submarine, isn't new. It was first proposed by a Russian engineer way back in 1939. Of course the idea was way futuristic back then, but it's only now that engineers have succeeded in developing a working prototype.

It's no brainer to understand that the air and water are two totally opposite environments for a machine to move. A flying machine requires large airfoils, for example wings or sails, to create the necessary lift and on the other hand the underwater swimming requires minimal surface area to reduce the overall drag on the body. 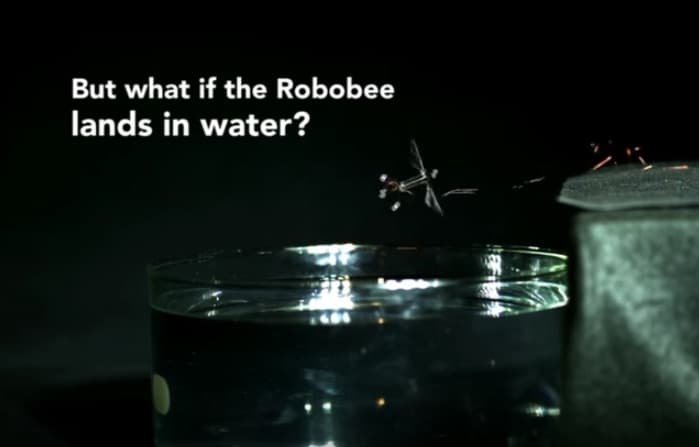 ​
It turned out that the nature has already offered a design inspiration in the form of puffins. Kevin Chen, a grad student at the Microrobotics Lab at SEAS, says that after studying several theoretical, experimental as well as computational papers, the team found out that the mechanics of swimming underwater and flying in the air are similar. The movement in both the medium requires back and forth movement of the wings or fins. The biggest difference, however, is that in air, the speed of flapping is much higher than in water.

Chen and his team designed the RoboBee at Wood's lab. They describe it as a 'microbot', just the size of a paperclip, capable of flying like an insect. The RoboBee can flap its wings 120 times per second in order to stay afloat in the air. However, its light weight makes it difficult for RoboBee to break the surface tension of water, preventing it from entering inside.

The team fixed this problem by making the RoboBee hover over the surface of water at an angle and momentarily cutting of power to the wings. This causes the RoboBee 'crash' into the water and sink.

Water is about 1000 times denser than air and if RoboBee tries to flip its wing at 120 times per second, it'd damage its internals. The team simply adjusted the flapping speed to just 9 per second, keeping the design the same.

The RoboBee can move freely inside water and change its direction by altering the stroke angle -similar to what it does when in air.

RoboBee currently requires wires to derive power from the power source. The team used deionized water and covered the connections with glue to avoid short circuits.

The team is now working on their next big challenge with the RoboBee - to create necessary lift to take the RoboBee from water back to the air. Chen says that it's the next design challenge the team is researching on. He says that the flapping motion of the RoboBee can be adapted in bigger sized machines. He says that larger aerial-aquatic robots are possible.


​
The bio inspired robots are leading to newer experiments in robotics. At CrazyEngineers, we've seen a bio-inspired Robotic Cockroach that mimics the real one. Also a robot created by Harvard Engineers that can jump on the surface of water using surface tension. We've also covered a robotic fish that swims under water and the DALER robot that flies like a vampire bat!

Do share your views about bio-inspired robots and the future.

Yeri Tazu · Oct 26, 2015
Rank E2 - BEGINNER
Well i m an civil engineer , don't know much about the robotic engineering.....
but i feel soo happy that the phase of engineering is growing in every field....🎉
0 Likes

Kaustubh Katdare · Oct 26, 2015
Rank A1 - PRO
Indeed. Advancement in engineering and general application of science is accelerating at a never seen before speed. I however feel that it's going bit directionless. We see incremental innovation in almost every technology these days; but nothing hints at the end goal.

Maybe we're just preparing for the big catastrophe that is likely to wipe out the entire human race from Earth? Maybe all of these technologies will help us survive against the wrath of the nature? I don't know.
0 Likes

Ankita Katdare · Oct 26, 2015
Rank A1 - PRO
More and more researchers seem to be inclined towards "bio-inspired" technology. After bigger animals, scientists are now turning to mimic the mode of operations in smaller insects. Isn't nature wonderful?
Bees and other insects have their own power supply and it doesn't weigh them down and is super efficient. They don't need batteries or wiring attached. It's just a complete full-proof setup. Wondering how tech will match that.
0 Likes