Ankita Katdare · Jul 24, 2015
Rank A1 - PRO
Folks over at Micromax are surely having a very busy week. They just announced that a media conference has been arranged on July 27 in New Delhi. The news came to light when the company sent out press invites that mentioned: "Micromax introduces a new level of multi-tasking with Mr. Vineet Taneja, CEO, Micromax Informatics." There's not much in the invite card, apart from the appeal to block the date. From a photo leaked online, it is being speculated that the phone may sport a metallic frame, but that's all we know about it. On the same day, the company is also going for the first open sale of the Micromax Canvas Spark (priced at Rs. 4999) exclusively via SnapDeal. 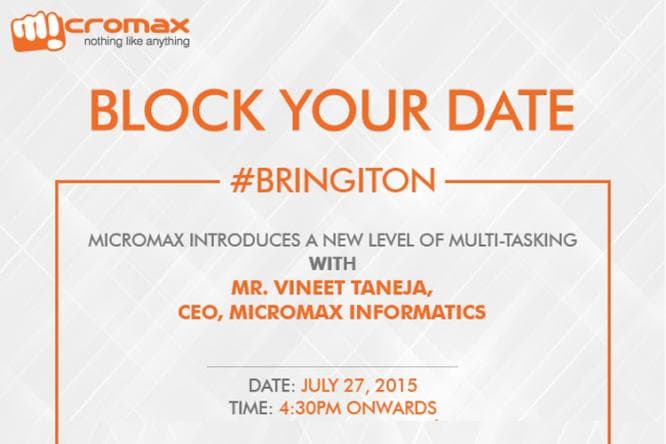 ​
Speaking of the big launches scheduled for next week, we have several big mentions here. First and foremost is the launch of OnePlus 2 slated to unveil on July 28 via a virtual reality event. The specs revealed by the company so far are nothing but impressive and the price is suggested to be between $320 and $450.

Other than that, on the same day we will see the launch of Motorola Moto G (2015) and Moto X(2015) in India. There's no word out about their pricing yet, but ample details about the phone's features are available.

In another press invite received today, we got to know that InFocus, the US based manufacturer is prepping up to astonish the audiences with an "Exciting Range of Products Inspired by Cutting-edge Design & Technology" on July 28 at an event in New Delhi. Posted in: #Gadgets
0 Likes
@ A2A Reply