Ankita Katdare · Feb 6, 2014
Rank A1 - PRO
Mozilla and EverythingMe (Israeli Startup) have given us a sneak peak to how Firefox Launcher for Android will look like once it is launched. The companies came together at the InContext Conference to showcase how the Firefox Launcher is going to provide its users with the best mobile web experience. So, now Mozilla's smartphone operating system called the "Firefox OS" gets a new app for launching apps. Integrating the power of EverythingMe's contextual adaptive app search along with the Firefox for Android browser, users can access a truly customized and personal web experience. The app is designed to make your interaction with it fun and intuitive.

Developing a mobile interface that understands the user's needs at any given context must have been a huge engineering challenge. The folks behind the contextual mobile technology have taken it to a whole new level. Firefox Launcher for Android will use a prediction bar that attempts at guessing which four apps you're most likely to use based on things like the time of day, your location and your browsing history. Using smart folders, the app is able to group apps based on your interests. In short, they are building an app that anticipate what users want without having to actually ask them for it. Therefore, the process of finding things becomes very fast as it searches in context. 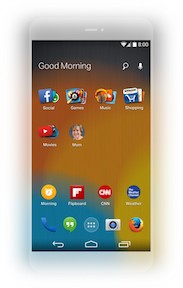 ​
To illustrate with an example, EverythingMe shares on its blog a practical application where they upgraded “Around Me” folder to appear automatically when you visit a new place, and show you things like restaurants, transportation and shops that are nearby. In fact, EverythingMe has put together a video that describes how the app delivers what you need, when you need it. In the following video you can see how it anticipates the apps, people and information you'd want, every time you pick up your phone.


​
Firefox Launcher for Android has now become the world’s first fully contextual mobile interface. How do you like its features? Share with us in comments below.