@Ankita Katdare • 29 May, 2014
Alcatel, the brand from the Chinese handset manufacturer - TCL, had come up with a new smartphone called "Alcatel One Touch Idol X+" and had officially launched it in China back in December 2013. After a series of leaks, Alcatel Idol X+ was introduced with an accessory called the BoomBand fitness tracker and JBL plug-in headphones. The smartphone is now available in India at a price of Rs. 16,999. The Alcatel Idol X+ with upgraded specifications is the successor to the Idol X launched in September last year. Let us take a look at the tech specs sheet for the new Alcatel smartphone in the country.

The Idol X+ features a 5-inch full HD display with 1080 pixel resolution made safe with Dragontrail Glass. Powered by a 2GHz MediaTek MT6592 Octa-Core processor and running on Android 4.2 Jelly Bean OS, the Alcatel Idol X+ sports a 2,500 mAh battery packed inside a body that is 7.9mm thin with a bezel of 1.9mm. The battery offers a talk time of 16 hours on 3G and a standby time for 600 hours. The smartphone packs 2GB of RAM and 16GB of onboard storage. On the rear end of the phone, you will find a 13 megapixel rear-facing camera that features Autofocus, Digital Zoom and LED Flash. The secondary camera on the front side of the phone is a 2 megapixel one, present for making video calls back home. 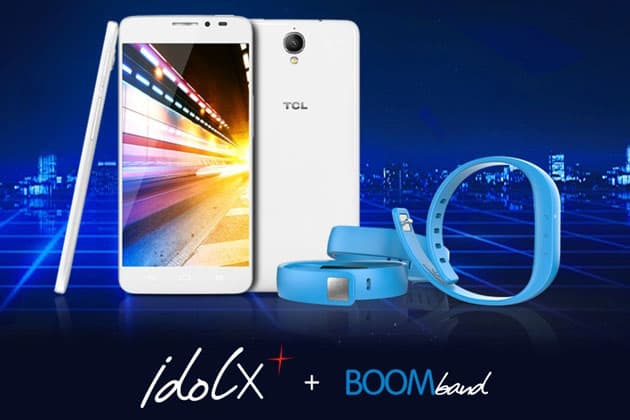 ​
The accompanying BoomBand is an accessory that you can use it is as a wearable Bluetooth device. Alcatel states that it will be able to track for activity as well as to ensure that you do not leave your phone behind, presumably by alerting the user once they are out of Bluetooth range. The Boom Band is nothing but a Bluetooth-enabled wristband that is available in various colors. It is compatible with the Idol X+ via a companion app, which also tracks user's fitness. The company will soon launch it as an independent wearable gadget in about 3 months from now and mark it as an official entry in the wearables craze.

That's all about the features and specs of the newly introduced Alcatel's android smartphone in India. What are your thoughts on it? Share with us in comments below.

The Idol X+ features a 5-inch full HD display with 1080 pixel resolution made safe with Dragontrail Glass. Powered by a 2GHz MediaTek MT6592 Octa-Core processor and a 2,500 mAh battery

This is an power house, I am impressed. The price is of a mid range phone 17 K and giving freebies as boomband and JBL headphones. Wonderful, I would say absolutely value for money!

On a different note, does bluetooth enable boomband eats battery like anything, through out the day?
8.4k views

Width in bits of double primitive type in Java is

Sir / madam, My question is The width in bits of double primitive type in Java is --. Select the one correct answer. a. The width of double is platform...
6k views
Read More →
Archives

I just found this site: Civil Engineering Online Review which has all the problems from past Civil Engineering Liscensure Board Examination. I hope it can help all the graduating students...
15.8k views
Read More →
Archives

hiii everyone.... we have a tech fest in our college..plz help me out on some crazy events in electrical and electronics engineering...
13.3k views
Read More →
Archives

IIT BHU students have developed an innovative alcohol sensing helmet equipped with breath analyser. The helmet connects with the electrical system of your bike and if it senses that you're...
4.6k views
Read More →
Archives

Why choose bank job after engineering? How to answer in interview?

This is the most asked question in interviews for banking jobs for engineering graduate freshers. Similar to the question "Why MBA after B.E. or B.Tech" that we've discussed a lot...
164.9k views
Read More →
Channels
👨‍💻 Remote Jobs 🗞️ News 🚀 Founders Circuit 🗄️ Archives ✨ Newsletter 🕹️ Changelog
About · Privacy · Terms of Service · Contact Us · © 2005 - 2022 CrazyEngineers. All rights reserved.