@Ankita Katdare • 21 May, 2014 • 1 like
A team of engineers from the University of Texas at Austin has developed a new machine called 'The Nanomotor' that is the smallest (1/500th times the size of a grain of salt) synthetic motor built to date, and surprisingly enough, it is the fastest (ultra-high-speed) and is able to run the longest. What is now being called a significant step in the direction of manufacturing 'miniature machines', the Nanomotor's development has paved the way for coming up with a first-of-its-kind devices that can be used in applications that require unprecedented precision such as controlled biochemical drug delivery to live cells & cell-to-cell communication. For example - Treatment of cancer cells without affecting the good cells or Administering insulin in a diabetic patient's body as and when needed. All this could be possible because the 3-part nanomotor is capable of mixing and pumping biochemicals and moving through liquids.

Developed by a team of engineering researchers including graduate students - Kwanoh Kim, Xiaobin Xu and Jianhe Guo, led by Donglei “Emma” Fan, an assistant professor at the Mechanical Engineering department from the Cockrell School of Engineering at the University, the nanomotor is capable of converting electrical energy into mechanical motion. The team is responsible for the custom design and assembly as well as testing of this unique nanomotor that features large driving power (delivers 15 continuous hours of rotating speed at 18,000 RPMs, which equals the speed of a motor in a jet airplane engine). It is important to note here that, the other nanomotors in existence today run at the speed of just 14 to 500 RPMs and can last only for a few minutes. 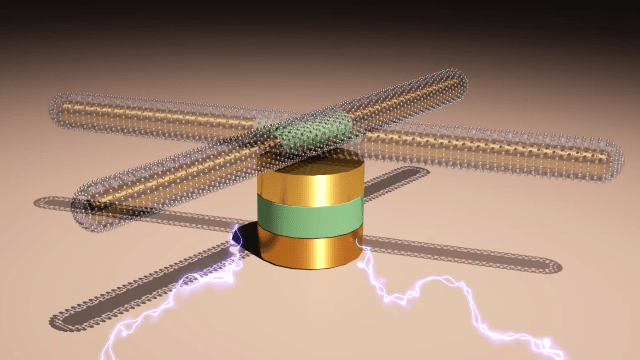 ​
The tiny nature of the nanomotor makes it possible to reach and stay in places that weren't possible earlier. For example, since the length and breadth do not exceed 1 micrometer in size, the nanomotor can easily fit inside a human cell. One amazing arena of application for this nanomotor is the field of nanoelectromechanical systems (NEMS), where such a machine will be able to push forward the frontiers of cheaper and more energy efficient systems.

To test the application where the nanomotor could deliver drugs to living cells, the engineers coated the nanomotor’s surface with biochemicals and started its spinning. The results showed that the faster the nanomotor rotated, the faster it released the drugs. The two major issues of "Assembly and Controls" have been tackled by this team so far. To run the motor, they incorporated a technique (yet to be patented) invented by Prof. Fan when she was studying at the Johns Hopkins University.

The technique can assemble the nanomotor's parts one after the other by relying on AC and DC electric fields. During their experiments, this technique was found useful in turning the nanomotors on and off and propelling the rotation in clockwise or counterclockwise direction. Moreover, the team was able to position the nanomotors in a pattern and move them in a synchronized fashion. As of now, the team is looking forward to developing new mechanical controls and chemical sensing that can be integrated into nanoelectromechanical devices.

Do take a look at the video explaining the nanomotor further -

Source: University of Texas Austin Research
@Sarathkumar Chandrasekaran • 21 May, 2014 Its a great invention of NEMS .The nanomotor shows good possibility of various application in drug delivery. It is very interesting to predict the future of humans and think how it would be the drug delivery system in near future .