Kaustubh Katdare · Jul 17, 2013
Rank A1 - PRO
Say hello to world's first ever robot with stainless steel body featuring seven degrees of freedom. The bot has been developed by Japan's Kawasaki Heavy Industries and is expected to be employed for discovery of drugs and other operations in the pharmaceutical field to automate the experiments. The robot will work on dangerous chemicals. Because of the stainless steel body, the robot can be sterilized using Hydrogen Peroxide gas so that it can work in sterile environments.The robot is expected to launch in January 2014. 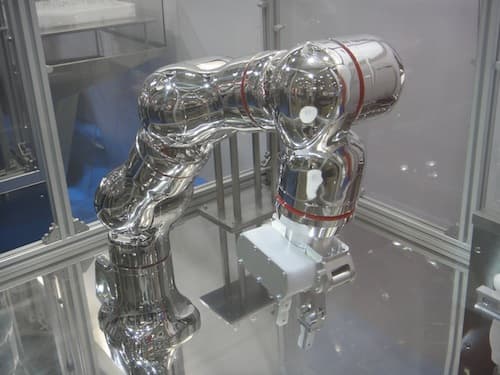 We've a video that shows the robot in action, performing all the drills smoothly with its stainless steel, masculine body like a pro.

Sarathkumar Chandrasekaran · Jul 17, 2013
Rank A2 - PRO
a great achievement by team Kawasaki.I have read about s six degrees of freedom but it sounds amazing to see seven degrees of freedom.
six degree: three linear movements and three rotational movements.
could you explain on seventh degree of freedom?
0 Likes

Minimum degrees of freedom for full coverage in 3d space are six ..
additional dof add redundancies..ie a single point in space can be reached in more than one way..
Human hand has 27 DOF 😁
0 Likes