@Ankita Katdare • 16 Oct, 2014
Videocon, the Indian mega electronics & telecom manufacturing giant, has come a long way over the last 5 years with its mobile device portfolio ranging from basic colour FM phones to high-end Android devices. The company recently launched a Rs. 5490 Android smartphone named Infinium Z40 Quad, and it's been just week & Videocon's back with another mid-budget segment smartphone named 'Videocon Infinium Graphite'. Running on the latest Android 4.4 (KitKat) OS, the new Videocon device is priced in India at Rs. 10,499 - a number close to many other recently-popular high-end specs featuring Androids. Let's take a look at the specifications.

Coming in a jet black color, as is reflected in the phone's name as well, the Infinium Graphite features a 4.7 inch HD OGS LTPS Capacitive Touch Screen that sports a resolution of 1280 x 720 pixels and is well protected with Corning Gorilla Glass 3. An 1800 mAh battery powers up this smartphone and 1.3 GHz Quad-Core processor runs the engine. On the phone's rear end, you'll find a 8 megapixel primary camera that features 5P lens with EXMOR and 88 degree wide angle as well as auto focus & flash. On the front, there's an above average 5 megapixel camera, which means that the selfies look great. 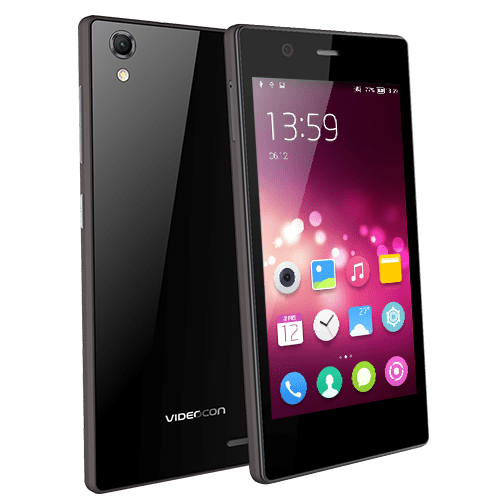 ​
Packed inside the device is 16 GB memory (which unfortunately is not expandable) and 1 GB RAM, the phone's specs list connectivity features as Bluetooth 4.0, Wi-Fi: 802.11b/g/n, GPS-AGPS and a 3.5 mm audio jack for plugging in earphones. The phone is a single SIM one and comes with FM Radio recording features. Apps such as Opera Mini, Email, V-secure, V-Safe, Gameloft and Hungama come pre-loaded out of the box.

Among its biggest competitors are the smartphone that lie in the similar price range and offer about the same specs, including - Asus Zenfone 5 , Sony Xperia M, XOLO Q900S, Gionee CTRL V5 and LG L70. What are your thoughts on the new Videocon Infinium Graphite smartphone? Share with us in comments below.

Source: Videocon Mobiles
@Sarathkumar Chandrasekaran • 16 Oct, 2014 Videocon is not impressive for the price tag of 10k.It would have been a hit when it had came back a year ago but it was too late.Only pros i see is that Camera is pretty good .Other than that nothing is spectacular
@Rajni Jain • 16 Oct, 2014 It is just another drop in the sea....nothing impressive !
3.4k views

India's first ever blast, flood, earthquake proof building will be ready by 2014 to protect all your 'AADHAAR' information, reports TOI. The data center being built at Bangalore will host...
5.3k views
Read More →
Archives

Intex has partnered with Amazon, Snapdeal and Paytm to announce the launch of its all new mega power bank with Intex PB11K that has the capacity of 11,000 mAh. Coming...
3.3k views
Read More →
Archives

What is Gini index? Why it is used in data mining .

The Gini coefficient measures the inequality among values of a frequency distribution (for example levels of income). A Gini coefficient of zero expresses perfect equality where all values are the...
12.4k views
Read More →
Archives

Did anybody know how much will be the salary package after doing M. Tech in Mechanical Engineering from IIT?
29.2k views
Read More →
Archives

Hi! I am new here and I just want to ask about my project idea. I want to know if my idea is possible using Raspberry Pi. I want to...
6.6k views
Read More →
Channels
👨‍💻 Remote Jobs 🗞️ News 🚀 Founders Circuit 🗄️ Archives ✨ Newsletter 🕹️ Changelog
About · Privacy · Terms of Service · Contact Us · © 2005 - 2022 CrazyEngineers. All rights reserved.