@Ankita Katdare • 07 Oct, 2014 • 2 likes
The construction of the world's biggest telescope or TMT (Thirty Meter Telescope) on the Hawaii Island near the Mauna Kea Volcano has begun. That's right. With India, Japan, US, Canada and China rolling their sleeves up, the development team is thinking of a completion date in 2022. The projected costs for this project are about $1.47 billion (and Japan would be bearing almost a quarter of it). A team of engineers, scientists and project managers is currently busy planning the design & construction of what shall become the most advanced and powerful optical telescope on Earth. Today i.e. on 7th Oct, 2014 Japan, a groundbreaking and blessing ceremony for the next-generation Thirty Meter Telescope (TMT) will take place.

What is the significance of the TMT Project and why 30 meters?

The TMT Project was born out of the merging of 3 large-scale telescope projects, namely - CELT (California Extremely Large Telescope), VLOT (Very Large Optical Telescope) and GSMT (Giant Segmented Mirror Telescope), initiated in 2003. Designed for optical and infrared observing, TMT would feature wavelengths ranging from 310 nanometers in the ultraviolet to 28 microns in the infrared. Once fully functional, the TMT project will help astronomers to study the stars and the solar system, the Milky Way and the galaxies far away. The TMT looks like one of many big steps our scientists are now taking to unlock the mysteries hidden in the corners of the observable universe as well as the story of the beginning of time. 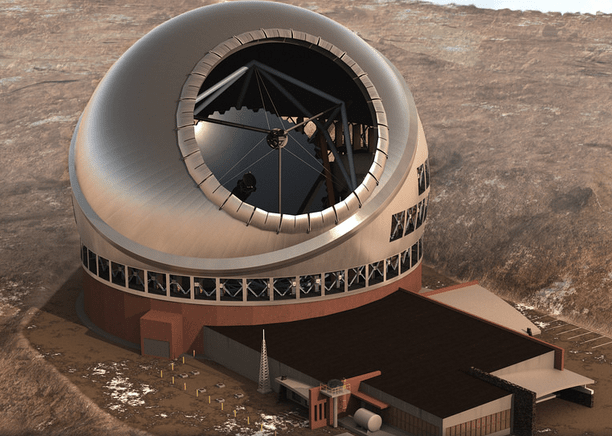 An artist's illustration of what the TMT might look like 8 years from now.​
If you are wondering about the dimensions, well, the scientists share that in theory arbitrarily large mirrors are possible. However, the engineering team's analysis suggested that that D = 30 meters occupies an attractive and achievable scientific “sweet spot” at near-infrared wavelengths.

1. TMT is the world's first ground-based astronomy telescope to be designed with adaptive optics (AO) as an integral system element.
2. TMT will feature biggest ever light collection area (10x times that of Keck telescopes) and unprecedented diffraction-limited spatial resolution.


​
India's Involvement In The TMT Project

Shri Narendra Modi, Prime Minister of India and the chairman of the The Union Cabinet gave approval for India's participation in the TMT Project for a total cost of Rs. 1299.8 crores from 2014-23. With this involvement, India has become a founding member of a very important international scientific project and has paved the way for Indian researchers and scientists to access the state-of-the-art telescope and help them find answers to the most fundamental questions in modern science.

We wish for the success of all the nations in the TMT Project and open the discussion on the thoughts, suggestions and opinions about the world's biggest telescope in the history of mankind.


​
Synopsis: With the mankind's time on Earth coming to an end, a team of explorers undertakes a mission to travel beyond this galaxy to discover whether mankind has a future among the stars.
Astronomy enthusiasts might find the movie worth watching.
@Ankita Katdare • 07 Oct, 2014 Tagging @durga @A.V.Ramani @Gollapinni Karthik Sharma @Shashank Moghe @Rajni Jain @Anoop Mathew @micheal john for their inputs.
@micheal john • 07 Oct, 2014

Ankita Katdare
Astronomy enthusiasts might find the movie worth watching.

yes, fan of nolan
i'm waiting for this to experience in IMAX for first time😀
@Ramani Aswath • 07 Oct, 2014 • 3 likes As an amateur astronomer, whose star gazing has been permanently blinded by the SPM and light pollution in Bangalore these past three decades I wish the project all success.
The co-coordinating node of the Indian effort will be at Indian Institute of Astrophysics.
The Indian effort is led by three institutes, namely the Indian Institute of Astrophysics (IIA) in Bengaluru, the Inter-University centre for Astronomy and Astrophysics in Pune and Aryabhatta Research Institute of Observational Sciences (ARIES) in Nainital.
https://www.iiap.res.in/files/tmt2.pdf
@Shashank Moghe • 07 Oct, 2014 • 1 like I was a part of IUCAA (no matter how small and insignificant) and am extremely proud We are a part of this effort. Science to empower!
@Rajni Jain • 08 Oct, 2014 Quarter cost will be borne by Japan, India is founding member... then is there any particular reason the selected place for the TMT is Hawaii Island?
@Ramani Aswath • 08 Oct, 2014

Rajni Jain
then is there any particular reason the selected place for the TMT is Hawaii Island?

An optical telescope is at the mercy of the elements. Absence of suspended particle matter, low humidity, low ambient light pollution, even temperature and maximum clear sky nights during the year are prime requirements for the choice of the site for an optical telescope.
8.9k views

Born and raised in Mumbai, Satej Sirur was brought up by parents who were both bankers. In his growing up years, Satej had to move around quite a bit. While...
3.9k views
Read More →
Archives