@Ankita Katdare • 11 Jan, 2015 • 1 like
TATA Sky is undoubtedly one of the biggest and most popular Direct-To-Home (DTH) operators in India and the company is stepping up the game by introducing a Tata Sky 4K Set top box (STB) for the first time in India. People in the industry had foreseen this announcement coming as in July last year, Tata Sky had showcased the first ever live FIFA World Cup Quarter final match in 4K. Now for the unaware, 4K resolution (often shortened to just 4K) is the visual content having horizontal resolution on the order of 4,000 pixels which is greater than UHD (Ultra High Definition). A 4K television set has a resolution of industry standard 4096 x 2160 pixels (at a 19:10 or 1.9:1 aspect ratio), whereas a UHD TV has 3840 x 2160 pixel resolution at 16:9 aspect ratio. TATA Sky feels proud to announce that the new year will welcome 4K picture quality in living rooms across India by Tata Sky 4K UHD set top box.

Since the service provider doesn't face any competition as of now in the Indian market (a scenario that should change soon), the 4K Set Top Box is being offered at a price of Rs. 6,400 for new subscribers, whereas the existing subscribers can own the box for Rs. 5,900. Good news is that, if you choose to replace your existing set top box, the new 4K STB will also showcase standard definition and HD channels alongside the 4K content. Well, it goes without saying that you need to have a 4K HD TV at your home to be able to view the 4K content (Cricket Matches, yep) relayed via the new TATA sky set top box. 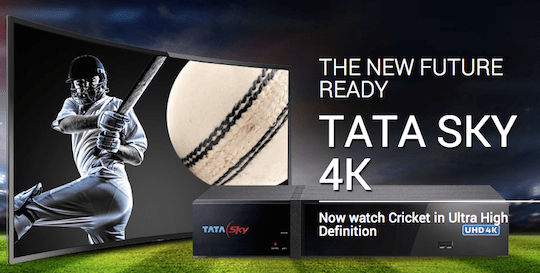 ​
Once you get the 4K STB, it can be used as the single connection and as an additional STB using the Tata Sky MultiTV connection option. Apart from the amazing picture quality delivered using 4x sharper picture and 10 bit true color, the Tata Sky 4K STB supports Dolby Digital Plus or 7.1 channels of premium surround sound.

Those eager to embrace the new technology by getting it for their own 4K television sets, can now do so by placing the order for their first 4K set top box in India via the tata sky official website. The company has chosen a great time to launch the STB as the cricket season is just around the corner and thus they've modified their popular tagling to "4k laga dala toh Cricket jingalala!"

While we are on the topic of 4K resolution, we would like to bring to your attention that Google has recently introduced the VP9 codec which will make it possible to stream 4K content on YouTube, without causing ISP bills to break your bank account. With that note, we end the talk on the new TATA Sky units that hopefully will soon get tough competition from other DTH service providers. What are your thoughts on the arrival of 4K set top boxes? Share with us in comments below.

Sony Xperia Z Ultra has been launched in India with a price tag of Rs. 46990. This 6.4" phone+tablet (aka phablet) will be available on eCommerce websites and retail stores...
4.8k views
Read More →
Archives

What types of CMOS memories have you designed? What were their size? Speed? Configuration Process technology? What work have you done on full chip Clock and Power distribution? What process...
2.2k views
Read More →
Archives

Spanish train maker Talgo has been given nod by the government to test run and demonstrate their lighter and faster trains on existing railway tracks in India. The Talgo trains...
2.3k views
Read More →
Archives

What is a coupling capacitor?

A new kind of Internet that are not dependent upon servers or URLs for browsing and sharing content is possible, according to computer researchers from University of Cambridge. They seem...
2.3k views
Read More →
Channels
👨‍💻 Remote Jobs 🗞️ News 🚀 Founders Circuit 🗄️ Archives ✨ Newsletter 🕹️ Changelog
About · Privacy · Terms of Service · Contact Us · © 2005 - 2022 CrazyEngineers. All rights reserved.