@Kaustubh Katdare • 11 Apr, 2014
Tata Motors has announced three new Tata Aria 2014 facelift models with price starting at Rs. 9.95L (ex-showroom, Delhi). Tata Motors continues to be India's largest automobile manufacturer and has finally woken up to the threats offered by the new Toyota Innova, which's dominating the roads in the Rs. 10L - 16L price segment. Will this new SUV from Tata win people's hearts? Check your bank balance, fasten your seat belt and be ready as we ride you through the new stuff Tata Aria 2014 offers. 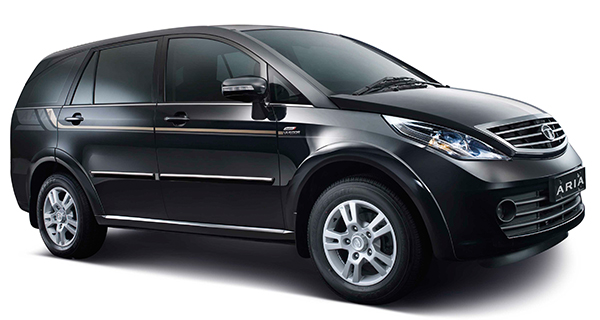 ​
The new Aria is being offered in three models: Pure LX, Pleasure and Pride (4x4) with ex-showroom prices Rs. 9.95L, 12.00L, 14.74L respectively. The designers of the car seem to have paid more attention to the looks of the car. The new Aria has stylish decals, clear lens rear lamps along with black bezel barrel headlamps. The 17" alloy wheels would make the SUV look sporty. Things get a little more exciting on the interior. 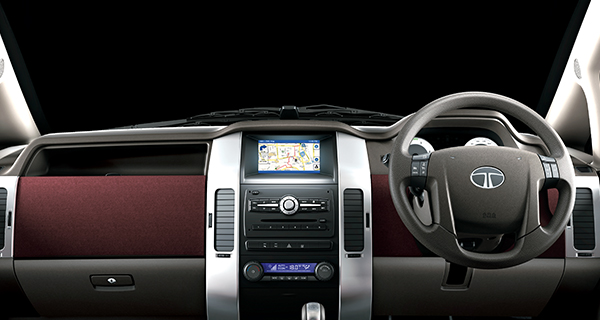 ​
The Aria offers NAVTEQ GPS system, 4x4 Adapterra, Tata Blue 5 connect and rain sensing butterfly wipers along with auto sensing headlamps. About 6 airbags will take care of the safety of the passengers in case of accidents. The car's equipped with Electronic Stability Program aka ESP and Traction Control System aka TCS. All the wheels have disk-brakes and ABS with electronic brake force distribution for more stability on the roads. Dual AC system offers fantastic climate control to keep the temperatures optimum for the passengers depending upon the outside conditions. The 10-speaker (6 speakers+4 tweeters) JBL by Harman Kardon music system, along with an 8-channel DSP amp should make your journeys pleasing.

The SUV is powered by a re-engineered 2.2L VARICOR engine capable of delivering 150PS power and 320Nm torque. Tata Motors says that the vehicle will do 15.05 kmpl. Head over to the official Tata Aria website and check out the details and do let us know your thoughts on the new Aria.

Do Indian Companies fail to identify the need of Indian SUV Customers ?

Share your views
@Kaustubh Katdare • 11 Apr, 2014 @Vikram S Bargah - I had the opportunity to check the Aria at Tata Showroom. I haven't yet seen the new Aria; but I can say that Tata's done a good job in developing an SUV that looks to be a solid competitor to Innova. People had complaints about the interiors in the old Aria and Tata seems to have addressed that issue to a greater extent.

Maruti's just an Indian brand; but they use Japanese technology (Suzuki) and Toyota too is Japanese. Scorpio and Bolero were an instant hit and the owners of these vehicles are still happy with the performance.

What do you think Aria has failed to address or do that Toyota Innova does better?
@Vikram S Bargah • 11 Apr, 2014

Kaustubh Katdare
@Vikram S Bargah - I had the opportunity to check the Aria at Tata Showroom. I haven't yet seen the new Aria; but I can say that Tata's done a good job in developing an SUV that looks to be a solid competitor to Innova. People had complaints about the interiors in the old Aria and Tata seems to have addressed that issue to a greater extent.

Maruti's just an Indian brand; but they use Japanese technology (Suzuki) and Toyota too is Japanese. Scorpio and Bolero were an instant hit and the owners of these vehicles are still happy with the performance.

What do you think Aria has failed to address or do that Toyota Innova does better?

I too believe that India make some really tough SUV's. But, People still go for Japanese technology against the Indian Ones.

May be this time Tata gets a chance to prove its ability in SUV segment & gain customer's faith in them.
@Kaustubh Katdare • 11 Apr, 2014 By the way, Tatas already own the Land Rover and I'm hearing the news that they're building a Rs. 25L SUV based on the Land Rover 'Freelander' platform. I bet once it makes it to the markets; it's going to be a HUGE hit. Tata will then be competing with Toyota's Fortuner; which I think is one hell of a super cool SUV in the market. A facelift of the Fortuner is expected in the next 1 or 2 years.
@Satya Swaroop Dash • 12 Apr, 2014 • 2 likes Here is the list of reasons that I think why the Aria did not take off in the first place.
- It was too big - I was at a mall parking and just as I double locked by bike a Aria went right besides me and I thought a truck passed right by me.
- Aria does not look as compact as compared to the stylish Innova or a Ertiga.
- Too much garnish - All those tools and gadgets just complicated the car and Indians like thier cars to be simplistic.
- They are not Japanese - Japanese car makers are often regarded as the ones who build cars that are cheap and cheerful at the same time. Even though Tata cars are superior, people opt for a Japanese car as they provide comfort and mileage like no other.

The new Aria checks the marks in terms of style and mileage but isn't just sleek and shiny as a Toyota Innova or a Ertiga
@Mali • 16 Apr, 2014 Hi
The problem with Indian automobiles the build quality is very cheap and so are the spare parts Put in them..The Japanese on the other hand have well engineering doen before building any new cars or suvs and there spare parts last donkeys years without any problem ..odometer showing like 3L Km still run strong ..over Indian brand by 85K km they start to feel old..and have oil leaks ..gasket leaking ..you name it and they have problems. .I feel that's why they sell really very well then over own brands ..in other words Indian brands sell you pencil and pens price ..and Japanese sell you Golden pen at golden pen price so that's one more reason ...altogether you can't beat there engineering. .I worked with them for like 6 months on a small project ..If the drawing says point 1 tolerance they will take all day and night to come to that size or will not go anymore ahead without doing it right.. that's called engineering
@Mali • 16 Apr, 2014 I also feel the service quality given by over Indian brands ..is really horrible there is no customers stiffcation by end of the day..Customer really gets pissed off when he puts all his hard earned money to buy there product .and when he gets to service center he things he has made a big mistake buying there product ..
5.6k views

Flipkart has announced the launch of Flipkart First - a premium customer subscription service that treats the users as VIPs. While there is no information available about the subscription charges,...
6.4k views
Read More →
Archives

Hi all, could anyone please suggest me the best books for DBMS and SQL(for beginners or you can say introductory). counting on your replies!!!!
6.4k views
Read More →
Archives

I had a gd today for alstom internship and it was worst. THe topic is the pros and cons of credit card. But i never use it so i dont...
6.1k views
Read More →
Archives