@Ankita Katdare • 27 Mar, 2014 • 1 like
Sony India has launched the first DTH Theatre in India with Sony HT-IV300 home entertainment system. Providing the viewers with great sound quality, the Sony DTH Theatre system features an incredible 1000W output, surround sound and crystal clear picture. Sporting 5.1 Ch surround sound in its specs sheet, the HT-IV300 can be connected to DTH via HDMI or Optical input. Moreover, it also supports connectivity using Bluetooth or NFC and hence can be connected to your tablet or smartphone. Along with the multi-angled speakers that look stylish and don't take much room thanks to their compact nature, the DTH Theatre system supports multiple format playback via USB. The formats include - MKV, MP3, MP4, AVC, WMV, VOB, Xvid HD and AVCHD.

The DTH Theater has a two way HDMI connector, which makes it possible to have easy connectivity between the television and DTH. Users have to connect DTH with IV300 and then LCD/LED with IV300. As stated earlier, the DTH Theater won't occupy a lot of space because its compact body is 40% smaller than a conventional home theater body. 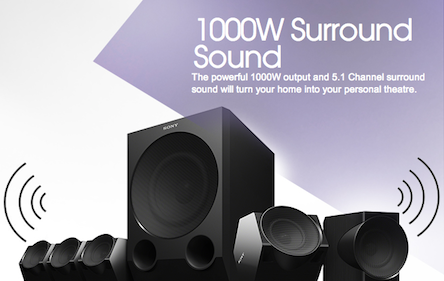 ​
Aptly named the 'DTH Theater', Sony has made it compatible with all major DTH providers in India including Dish TV, Big TV, Tata Sky, Airtel Digital TV and Sun Direct. The system functions with Miracast, FM Radio tuning as well as screen mirroring. The HDD supports FAT32 and NTFS file system and supports use of External HDD. The front, center and surround speakers as well as the sub-woofer are all bass reflex and have metal front grille. The HDMI wuality video features BRAVIA sync, audio return channel and 3D pass through. 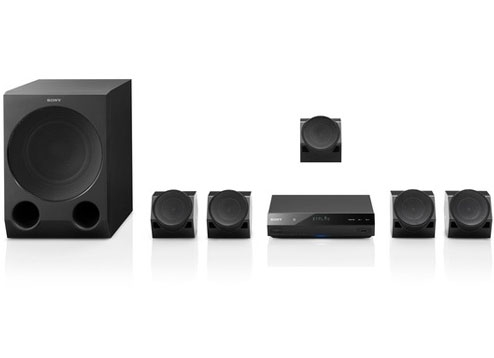 ​
As far as the pricing and availability is concerned - the Sony DTH Theatre can be bought at a price of Rs. 19,990 from any of the Sony Centers and major electronic stores across India, starting first week of April 2014. How do you like the price, specs and features of the first DTH theatre sound system in India? Share with us in comments below.

Source: Sony India
@Manu Pillai • 27 Mar, 2014 • 2 likes I keep keen interest in Home Theater systems and Sound tech. Especially of SONY, because I have a BDV-E290 Blu-ray HT myself which I got last year March.

The Base hardware for Sony HT in this budget price range has been almost the same since few years, with them adding and deleting some features to create different models.

After knowing about this DTH Home Theater now after 1 year since my Blu-ray HT purchase, my system looks very much dated with:

This DTH Home Theater actually makes a lot of sense nowadays, since most people prefer and watch the huge TV content more than CD/DVD/Blu-ray content which have become passe. No a USB port would be enough on the HT to watch videos or listen to songs.

Also It is interesting to see that "Videocon D2H HD" is not there in the compatible list of this HT. I have got one and the D2H box doesn't have Optical audio-out, which is the only Digital Audio-In option on the Sony BDV-E290. So I will need a S/PDIF COAX to TOSLINK converter box to send my D2H 5.1 audio to the HT.

Also the D2H doesn't work with Passive HDMI Switches due to a low Current problem or may be HDCP Protection.

The Import Taxes on such systems are quite high in India, which proves why this unit is selling at almost INR 10,000 more than Import price !
18.7k views

i need topics for mini projects in c++

hello every one in CE. so glad to join this. proud to say that we are engineers.... i need a good topic to start a mini project in C++. hope...
4.8k views
Read More →
Archives

Inside view of DC generators & motors

Somebody please give me some basic diagrammatic view(some link having inside pictures will surely help) of dc generators and motors as m not finding them in my books and without...
4.5k views
Read More →
Archives

Was wondering why laptop manufacturers don't offer 4G or 3G connectivity built right into the machine itself. These days, most of the laptops have to rely on external dongles or...
9k views
Read More →
Archives

i have decided to make a project that uses GPS. but i don't know much about GPS, but i do know basics of c, c++ languages, so am just a...
5.1k views
Read More →
Channels
👨‍💻 Remote Jobs 🗞️ News 🚀 Founders Circuit 🗄️ Archives ✨ Newsletter 🕹️ Changelog
About · Privacy · Terms of Service · Contact Us · © 2005 - 2022 CrazyEngineers. All rights reserved.