Skype For Windows 8.1 Download Is Up - Update Features Easy Multitasking

@Ankita Katdare • 18 Nov, 2013
Skype has now arrived in an updated version on Windows 8.1, which makes sure that it keeps up with the latest Windows multitasking features. Those who download the new Skype for Windows 8.1 will be able to use it on Microsoft Surface tablet as well as other Windows running devices from other OEMs. On their official blog, folks over at Skype write that they have developed the Skype update by keeping in mind the young adults who rely (heavily) on the internet and their mobile devices for important communication needs. Therefore, the latest Skype update features support for picking up calls and messages from the lock screen, start screen, or any application you happen to be in - so you never miss on anything ever again.

When Skype for Windows 8 was launched, we saw the debut of the new modern look of Skype. With Skype for Windows 8.1, we have features to launch apps side-by-side with Skype and scale to the size of your device. Skype users can not only share the screen with other apps but open another app (the browser, a picture, an Office document, etc.) and have it snap to the side of Skype. Another update is about Navigation through the friend list - it's made smoother. Users will also be able to share and receive digital media files - size no bar. 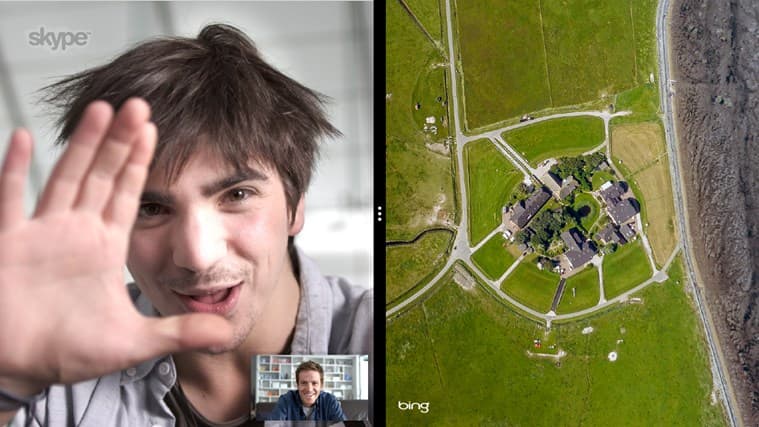 ​
Skype users on a WiFi, 3G or LTE connection can connect with anyone on any PC, Mac, Android, iPad, Windows Phone, iPhone, Xbox One or more - and even if they are not online, you can call them. Users can also send instant messages with emoticons to these friends. With the help of the Windows team, Skype has created an application that intuitively changes based on the aspect ratio and orientation of the devices’ screen. You can download the Skype app for Windows 8.1 on the official application store. Here is a video put up by Skype to highlight the update's latest features for Windows 8.1 -


​
It is also important to note that, making voice calls to landlines or mobile phones which do not have internet or Skype installed on them is cheaper with Skype. The app size is less than 11 MB and can be downloaded for free. Here's a question to all Windows users - Which app do you love more for chatting with friends - Microsoft Lync or Skype?
9.2k views

I was wondering if there's any way or hack to access whatsapp online via desktop or laptop. I've been told that one of the way is to install an Android...
115.6k views
Read More →
Archives

Hello everyone, Congratulations to all who got admission for CDAC - 2015 August Batch. Afrer seeing a lot of queries about several centers and confusion about their Teaching and Placement...
5.6k views
Read More →
Archives

DALER robot can walk and fly like a vampire bat

DALER (Deployable Air-Land Exploration Robot) is the latest swiss engineering marvel. It's a robot that can walk and fly as well; and derives its inspiration from the vampire bat Desmodus...
5.5k views
Read More →
Archives

An YouTube Uploader who goes by the name 'Amazing Science 君' has created this simply DIY project. It's being called the world's simplest electric train. Using a magnet, a dry...
7k views
Read More →
Archives