@Ankita Katdare • 27 Nov, 2013
After being a part of lots of rumors and a series of leaks, Nokia Inc. has finally launched its much talked about smartphone - the Nokia Lumia 525. A successor to the ever-popular Nokia 520, we see that the smartphone manufacturer from Finland hasn't changed the phone in looks. As you look down the Nokia Lumia 525 specifications list, you find that there's an upgrade in the memory but everything else on the inside as well as outside looks the same. Let us take a look at the Windows 8 operating system running Lumia 525's features one by one.

The smartphone features a 4-inch IPS LCD screen with super sensitive touch, WVGA (800 x 480 pixel) resolution 235 ppi pixel density. Thanks to Brightness control, Orientation sensor and Lumia Color profile, the pictures on this Lumia's screen have TrueColor and look vivid and beautiful. Powered by the 1 GHx Qualcomm Snapdragon S4 Dual-core processor, the Lumia 525 brings with it 1 GB of RAM, 8 GB of internal memory which is expandable up to 64 GB using micro SD card. Nokia also provides 7 GB of free Cloud storage through SkyDrive. 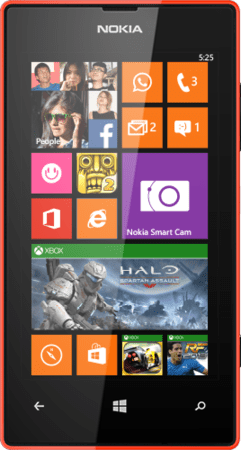 ​
Among other tech specs, the Nokia Lumia 525 has 124 g weight and connectivity needs are catered to using Bluetooth 4.0, Wi-Fi 802.11 b/g/n, USB 2.0 and a 3.4mm audio connector. The phone supports Micro SIM card and brings with it a host of pre-loaded app for great productivity and fun. There's Business apps free for download like Adobe acrobat reader, Lync (Corporate IM) and Office apps such as Excel, Word, Powerpoint, OneNote etc. For gaming lovers, it is good to note that the Lumia 525 sports support for DirectX 11, Touch UI as well as XBox-Live Hub.

When talking of a Nokia Lumia smartphone, we need to mention the facility of using the Location and navigation apps - HERE Drive, HERE Maps and HERE Transit. Using A-GPS, Cellular and Wi-Fi network positioning, A-GLONASS, a Lumia phone user can have free regional voice-guided directions, explore malls, stations and more with venue maps, Get around by bus or train and even compare route options. Users also get to use a rebranded Nokia MixRadio streaming music service. Check out the following video put up by Nokia to explore more features of the phone -


​
Inside the package of Nokia Lumia 525, buyers will find a Charger AC-20, Nokia Battery BL-5J , Nokia Charging and Data Cable CA-189CD and a Nokia Stereo Headset WH-108. According to the Verge, Nokia Lumia 525 will be available in Singapore initially on December 14th for SGD249 ($199). Nokia Inc. has confirmed that the phone will be launched eventually throughout Africa, Asia Pacific, and the Middle East.
@Satya Swaroop Dash • 07 Jan, 2014 • 1 like Update: Nokia Lumia 525 has arrived in India today (January 7, 2014) in gloss orange, white, yellow and matte black colour variants with a Rs. 10399 price tag.

Have you ever wondered what is the logic behind equation: (a+b)²=a²+2ab +b² ? This video explains it in very easy to understand language.
5.5k views
Read More →
Archives

CEans, I request all of you who have appeared for WIPRO's Technical Interviews to share your experience with all of us. Tell us what questions were asked and how you...
3.3k views
Read More →
Archives

How to fix Whatsapp "Failed. Out of memory. Please try again later." error?

WhatsApp has been showing the nasty "Failed. Out of memory. Please try again later." error message whenever I send multiple photos to a group or any of my content. After...
30.4k views
Read More →
Archives

What is wringing of slip gauges?

Hello, I am Kedar and I am a crazy Mechanical engineer. I wanted to know what exactly is Wringing of slip gauges? I would appreciate if someone explained the process...
11k views
Read More →
Channels
👨‍💻 Remote Jobs 🗞️ News 🚀 Founders Circuit 🗄️ Archives ✨ Newsletter 🕹️ Changelog
About · Privacy · Terms of Service · Contact Us · © 2005 - 2022 CrazyEngineers. All rights reserved.