@Ankita Katdare • 18 Sep, 2013 • 1 like
Micromax Mobile, the Indian consumer electronics manufacturer, is here to sizzle the tablet market with a new product called the Micromax Canvas Tablet P650. The smartphone maker has unveiled this all new Android 4.2 Jelly Bean Tablet at a price of Rs. 16,500. The Micromax Canvas Tab P650 tablet features an 8-inch IPS display. Bearing the 1.2 GHz quad core processor, the tablet's specs speak of 1 GB of RAM and a 4800 mAh battery. The Android flavor is upgradable through FOTA (Firmware Over The Air). Offering a 16GB internal storage and microSD expansion up to 32GBm, the new Canvas Tab P650 has a lot to be seen on the tech specs list.

There's a 5 megapixel rear camera and 2 megapixel front one. The tablet works on Wi-Fi as well as 3G networks and comes with voice calling facility. Offering five hours of browsing time on 3G, the tablet comes pre-loaded with apps like Spuul, Opera Mini, M! Live, Music Hub and M! Security. There's the feature of multiple video view, look away pause and video pinning. Available in two colors - Blue and White, the looks of the tablet are just about average. Nothing much exciting packed in there. 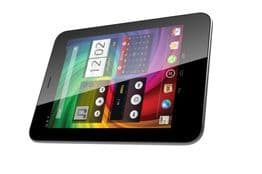 Commenting on the launch, Rahul Sharma, Micromax co-founder, said, "With Canvas Tab, we are offering Indian consumers a unique combination of superior technology complemented with unmatched style. We aim to extend the Canvas experience to our users on the tablet PCs, supported by an entire eco-system of applications. The Canvas Tab will strengthen our leadership in the tablet PC market complemented with a 360 degree go to market strategy to reach out to the consumers."

Since the Micromax Canvas tablet is the company's official entry into the tablet market, we can expect the launch of many more exciting product launches in the near future. Up until now, Micromax has been launching tablets under its Funbook portfolio. We have told you about the Micromax Funbook and Micromax Funbook Pro, Alpha and Infinity. Those were very cheaply priced Android tablets. We will have to wait and watch to see if the new tablet series becomes a great initiative for the company. Let us know your thoughts on the new tablet in comments below.
@Ankita Katdare • 19 Sep, 2013 It is being discussed that the Canvas Tab P650 tablet is brought to the market to compete with Apple iPad mini and Samsung Galaxy Tab 3 (311) - since the display is 8-inch screen. So, I think I really want to what CEans think about this.

For Micromax, the sales for 2012-13 stood at 1.9 million units as against 0.36 million units in 2011-12. Micromax ranks second with 13.33% market share after Samsung with 15.76% in the tablet market in India. 😀 Do consider these numbers, before you comment.
@Sarathkumar Chandrasekaran • 19 Sep, 2013 This is what we are waiting for.A tab with best configuration with justifiable price.Specification looks great and micromax had been climbing to the top at a ramphant phase which can soon be a threat to so called "branded" companies products.
@srsmanyam • 19 Sep, 2013 but this will be bad idea to take this,instead you can take SAMSUNG GALAXY TAB-3 which costs around 16K, until unless u r a bad lover of indigenous products!
@MKHamirwasia • 19 Sep, 2013

srsmanyam
but this will be bad idea to take this,instead you can take SAMSUNG GALAXY TAB-3 which costs around 16K, until unless u r a bad lover of indigenous products!

With Canvas, you get an 8" IPS display screen and a more powerful battery! So, it is better to go for the Canvas Tab P650.
6.4k views

According to a report in NDTV, India's Bajaj & Austrian KTM are planning to bring more KTM bikes in India. The duo launched the KTM 390 Duke yesterday and have...
3.6k views
Read More →
Archives

A lot of engineering students aspire to become teachers. As some guy wisely said - In India students first become engineering graduates, and then decide what they want from their...
91.1k views
Read More →
Archives

I need solution manual for Hughes Electrical and electronics technology. where can i get this? Please Help me.
9.5k views
Read More →
Archives

A lot of students seem to be complaining that not many core domain companies in mechanical engineering visit for campus placements. I guess they restrict their visits only to top...
6.2k views
Read More →
Archives