@Ankita Katdare • 08 May, 2014 • 1 like
No more waiting till the results of the blood tests are out to know the correct diagnosis. If the lab-on-a-chip (LOC) concept from engineers at Michigan University works out for real, you and I will be able to get blood test results instantly on the go. Putting an end to the tedious process of visiting the physician who takes your blood sample and sends it to the lab for testing, the Michigan research team wants the doctors to run those tests almost instantly on a credit-card sized piece of plastic. The researchers have gone on to share that their Lab-on-a-chip method is portable as well as cheap.The currently used lab-on-a-chip are constructed manually and hence can run just one or two tests. If we bring computer-aided design (CAD) into the picture, Shiyan Hu, an associate professor of electrical and computer engineering at Michigan Technological University, believes that we would be able to take dozens of tests with a single drop of blood. 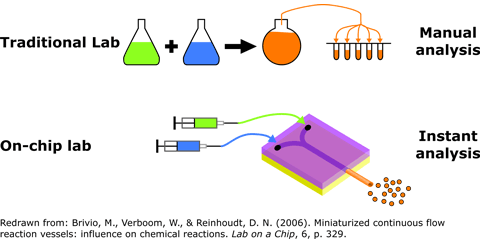 Just an illustration of the Lab-on-a-chip device​
Over the last 4 years, the Michigan engineering research team has developed a software to design the hardware for this kind of a lab-on-a-chip. It will be capable of testing a single drop for multiple conditions, instead of just one. Mr. Hu says, "This really would be an entire lab on a chip." What's really admirable is that, their chip can get us more accurate results than a conventional lab's. They have aimed at routing the droplet of blood or other fluid through each test on the chip efficiently in such a way that chip's contaminated is avoided. Doing this all on a chip that is inexpensive must've been a real challenge for the engineers.

The LOCs in use today suffer from the following disadvantages - Since they are a comparatively newer technology, they are not yet full-proof. They can undergo certain physical and chemical effects such as surface roughness or chemical interactions of construction materials on reaction processes and even though they've shown great precision in microfabrication, they may often be poorer when compared to precision engineering. All this goes to say that there's still time for the chips to become commercially available.

The final goal for Michigan team is fabricate their own biochip using their software. For now, their research work has found recognition through the journal called "IEEE Transactions on Nanobiosciences" in an article titled “Physical-Level Synthesis for Digital Lab-On-a-Chip Considering Variation, Contamination, and Defect.”

It would be great to read your thoughts on the Lab-on-a-chip concept. Shoot in the comments.

Source: Michigan Tech
@Sarathkumar Chandrasekaran • 08 May, 2014 Great attempt by Michigan engineers.It would be a great deal if it is commercially feasible .
good article.
@micheal john • 08 May, 2014

we would be able to take dozens of tests with a single drop of blood.

saving blood, awesome😀
@Rajni Jain • 09 May, 2014 Inexpensive, high time efficiency, portability and detection accuracy,due to all these features this technique will surely be used in various fields such as bio-medical , bio-chemical and human health analysis.