@Ankita Katdare • 10 Sep, 2014 • 2 likes
The supersport bikes KTM RC 200 and KTM RC 390 are ready to roar on Indian streets as KTM, the Austrian motorbike brand, in which Bajaj Auto holds a 48% stake, has announced their launched at introductory prices of Rs. 1.60 lakh and Rs. 2.05 lakh respectively. The RC200 features a 199.5 cc engine and comes with premium components such as USD front fork, multifunctional fully digital display and radial brake caliper. Whereas the KTM RC 390 is a sports bike in its purest form. Powered by a 373.2-cc single cylinder 4-stroke water-cooled engine, the bike features spectacular looks and the company boasts off saying that performance and power of the bike are nothing short of incredible. Let us take a look at the specifications chart for both the new bikes in India and find out if they live up to the prices they're offered at.

Starting with KTM RC 200 - This bike's upside-down fork from WP Suspension has the same 43 mm outer tube diameter as the RC8 R. It features a light alloy swingarm with directly linked WP shock absorber. The distinctive orange painted frame has been revamped to better fit the bike's ergonomics. The increase of the steering head angle to 66.5 degrees has resulted in the bike featuring a shorter trail, shorter wheelbase (1,340±15 mm) and increasing ground clearance (178.5 mm). Apart from that, in the looks section, the brand new forged aluminum triple clamps coupled with clip-on handlebars are the eye-catchers.

The 17 in orange painted cast light alloy wheels sized 110 mm wide at the front and an impressive 150 mm at the rear. The brake system department has 4-piston radially bolted caliper with a combo of a single brake disk (300mm diameter) in the front and a 1-piston floating caliper with a single brake disk (230mm diameter) for the rear wheel. The 9.5l capacity steel fuel tank has been developed specially for the RC 200 and a seat height of 820mm enables the rider to have a secure stance while driving. 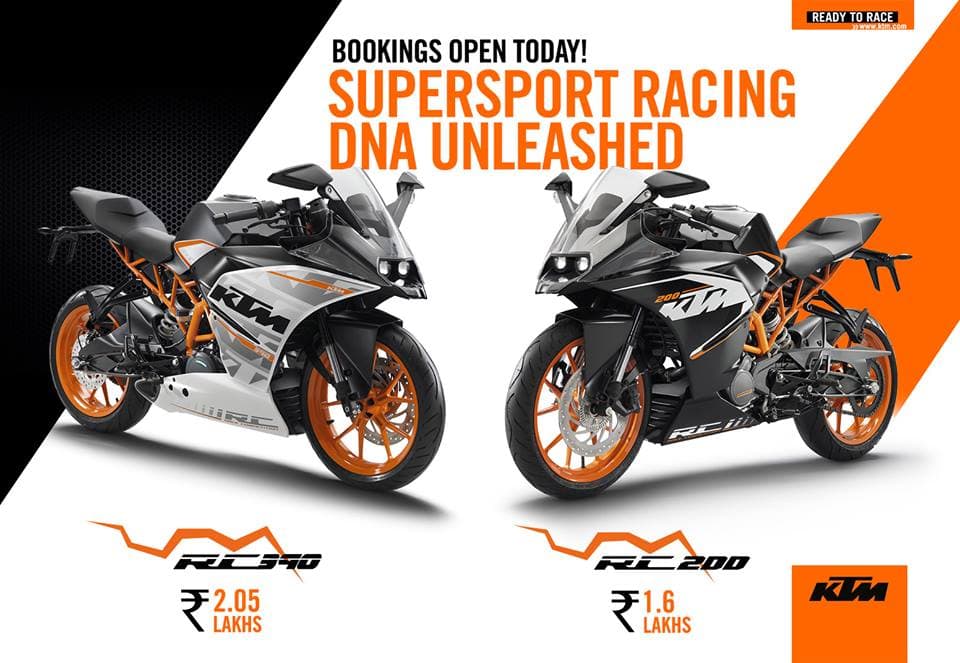 Coming to KTM RC 390 - The bike is visually similar to the lightweight and approved Duke steel trellis frame. It features a 100% digital display and the 375 ccm engine which has forged piston, Nikasil-cylinder-coating and forced feed lubrication, is pretty lightweight at 36kg. Delivering a power of 44hp, the KTM RC 390 engine comes with a 12V/6Ah battery for electric start. Apart from these, the specifications list that the wheel base, ground clearance, seat height, front & rear suspension, disc brakes and fuel tank capacity are the same as that of KTM RC 200.

That's all about the two new sportbikes in town. There's the likes of Honda CBR 250R and Yamaha R15 already rocking the Indian streets, to give a tough competition to the KTM duo. At the launch, the officials shared that KTM has experienced a growth by 120% in the current financial year. With the launch of the two new RC series bikes, the company hopes to become the fastest selling brand in India.

What are your thoughts on the looks, specs and price of KTM RC 200 and RC 390? Share with us in comments below.

Source: KTM RC 200 | RC 390
@Ankita Katdare • 10 Sep, 2014 What do you guys think about the new supersport bikes?
@Kaustubh Katdare @SarathKumar Chandrasekaran @zaveri @Mr.Don @Ghost Rider @Ambarish Ganesh @Shrikant Bedekar
@Sarathkumar Chandrasekaran • 11 Sep, 2014 already read about it . RC 390 is really killing it. KTM is one true company which i feel that they were on best track to become best high end bike seller in India. specs were mind blowing
@prahu mac • 12 Sep, 2014 it seems to me like a bit over priced with the specs that i saw!!!!!
8.7k views

Q. xyz+xyz+xyz=zzz Find the value of xyz? condition: values of xyz must be same throughout the expression.
12.9k views
Read More →
Archives

What is the minimum value of char type?

How to delete folder because files open in UDisk Monitor

I want to delete a folder but when I try deleting it, I get a message that says "The action can't be completed because the file is open in UDisk...
3.8k views
Read More →
Archives