Jio was the fastest 4G network in India in April - TRAI

The third spot was taken by Vodafone India, lagging behind Idea by a small margin. Vodafone's download speeds were averaged at 13.3 Mbps. Airtel, which had recently claimed that their network is the fastest secured the last spot, with 10.15 Mbsp download speed. Airtel had put forth the numbers provided by Ookla's speedtest, back in January. 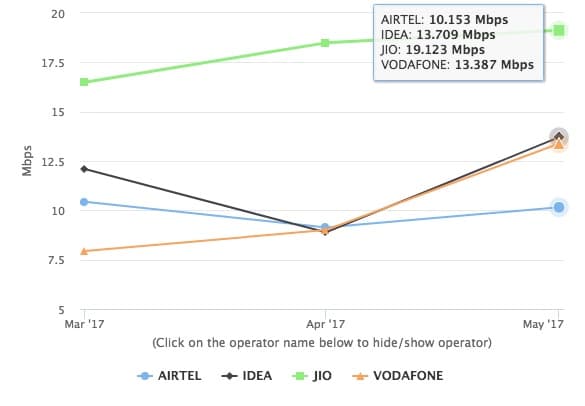 Image Credit: TRAI​
However, the rankings altered when it comes to upload speeds over the 4G network. Idea Cellular was the fastest with 8.45 Mbps followed by Vodafone at 7.3 Mbps and Jio at 5.3 Mbps. Airtel again was slowest with 4.6 Mbps upload speeds. The upload speed matters when you are uploading content on the Internet, such as your photos or videos.

The trends published on the myspeed.trai.gov.in website hint that Jio's performance has improved already, averaging about 19.123 Mbps in the month of May while Idea has retained its second position at 13.709 Mbps. We've been hearing the news that Jio is very serious about improving their network and has planned to install ~90,000 cell towers all over India; to improve the coverage.

That said, in order to compete with the threat from Reliance Jio, Idea Cellular and Vodafone India have announced a merger to create India's largest telecom operator. The entity would then command 35% telecom market share in India.

We'd like to know from our fellow engineers about their experience of using various mobile networks in India. Do share your location and the average download/upload speed your are getting on your network.

Kaustubh Katdare · Jun 4, 2017
Rank A1 - PRO
Update:
I've a Jio connection and was able to test Jio speeds in Pune as well as in Nagpur. The max speed I've had was ~18 Mbps; however, on any day, I'd not get more than 8-10 Mbps. It does the job; but I'm not very happy with it. I can also confirm that the Jio network is definitely improving and the range they offer is quite awesome. On most of the highways, Jio's streaming works without any interruption.
0 Likes