@Ankita Katdare • 01 Apr, 2015
If you are looking to buy a car this year, Ford India is here to unveil a brand new compact sedan option. News has it that Ford is all set to launch a new sedan named 'Ford Figo Aspire' in India soon. To be made available in two high performance engine variants - 1.5L TDCi diesel and 1.2L TiVCT petrol, the Ford Figo Aspire is going to be manufactured at the newly inaugurated facility at Sanand (Gujarat). In a bright red signature colour, the sedan stands out with its aerodynamic design and can definitely be called as one to be a visually striking automobile. Set to compete against the likes of Honda Amaze, Swift Dzire, Hyundai Xcent and Tata Zest, the all new Ford Figo Aspire is expected to be priced in the range of Rs. 5-8 lakh. For Ford India, it seems like a right thing to do to launch a compact sedan after rocking the SUV segment with its massively popular Ford EcoSport.

It is being anticipated that the 1.2-litre four-cylinder engine would produce 75bhp and 102Nm, while the 1.5-litre diesel variant should deliver 89bhp and 204Nm. Automobile enthusiasts are also expecting a 5-speed manual as well as a 6-speed dual clutch gearbox option in the petrol version. If speculation turn out to be correct, the Ford Figo mileage may be numbered to 16-18 kmpl for petrol variant and 23-25 kmpl for the diesel option. As for the design, from the images that have surfaced on Ford India website, the company seems to have gotten rid of LED headlamps, tail lights and fog lamps. The huge trapezoidal grille and the swept back headlamps add to the bold & beautiful look of the car. 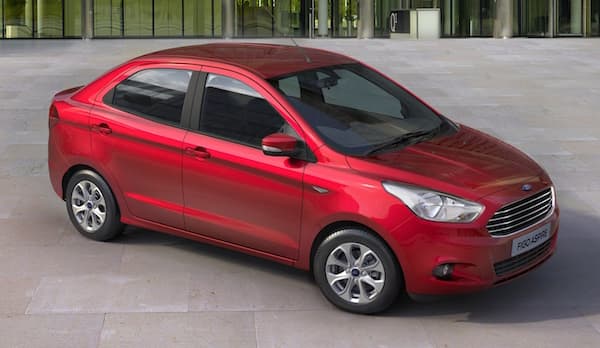 ​
The Ford Figo Aspire ensures rider's safety with the first-in-class side and curtain airbags. Moreover, the sedan packs a robust high-strength steel body structure under the hood for enhanced protection. Though not many details about the interiors of the sedan are out yet, but we do know that the Figo Aspire will come equipped with voice-activated SYNC with Ford AppLink, a feature that lets you control your apps, music and phone, hands-free. In case of a mishap on the road, the SYNC Emergency Assist system automatically calls for help via your paired smartphone.

Finally, it's being said that the Ford India’s new Gujarat plant brings an annual production capacity of 2.4 lakh vehicles and 2.7 lakh engines to the table. By producing most components locally, it is being expected that Ford will put up highly competitive price tag on the Figo Aspire sedan. Though the launch is slated for mid-2015, we would like to know your views about the looks, price and specifications of the all new Ford Figo Aspire. Share your thoughts with us in comments below.

what are the advantages of using mosfet as an amplifier?

hi everyone, please tell me what are the advantages of using mosfet amplifier as compared to a linear amplifier in a practical electronics circuit. regards, aparna
4.1k views
Read More →
Archives

Smarty Ring, a project out of India, is the new wearable gadget in the tech town. Remember the time when you are frantically searching for your smartphone in the purse...
8.4k views
Read More →
Archives

Inside It : Brayton Cycle

During her KYCEan interview, CEan Durga mentioned that she would like something like "How Stuff Works" on CE. The idea sounded good and I have decided to write the first...
4k views
Read More →
Archives