FIFA 2014 : First Kick To Be Delivered By A Paraplegic Brazilian In Robotic Exosuit

Kaustubh Katdare · Apr 2, 2014
Rank A1 - PRO
FIFA 2014 is heading to an innovative start that will mark the end of era of the wheelchairs. On Jun 12, 2014 a young paraplegic Brazilian will get up from wheelchair, walk over to the midfield in a robotic exosuit and deliver the first kick of the FIFA 2014 World Cup. The exosuit is a creation of a neuroengineer from the Duke University, Mr. Miguel Nicolelis. Nicolelis is quite sure that millions tuned to their television sets will see the beginning of a new era in robotics and machine-human interaction. 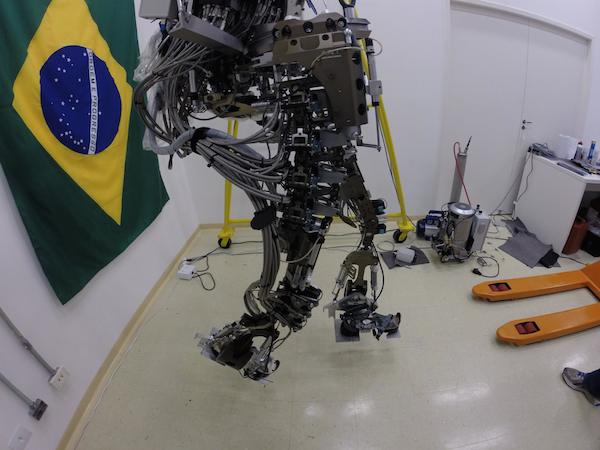 Photo Source: Facebook​
The exosuit is a mind-controlled exoskeleton; similar to the one you saw in movies. It's one heck of a complex machine built using lightweight alloys, some sophisticated hydraulics and kick-ass electronics. As soon as the controller is in position, the machine takes over and obeys the instructions of the master. The exoskeleton has been developed by a huge team of engineers working on the 'Walk Again' project. The team has worked on interpreting brain signals and using them to control various movements of the robot.

Nicolelis and his team is training a team of 9 paraplegic volunteers aged 20 to 40 to use the exoskeleton. One of these volunteers will head to the field and perform demonstration before the opening game between Croatia and Brazil. The volunteer will have to wear a special skull-cap with electrodes to capture the brain waves. These brain waves will be analysed by the computer worn in a backpack and the robot will be instructed accordingly. So far the volunteers have successfully walked on the treadmill. Several safety tests are being performed to ensure smoother operations. The gyros installed on the exosuit will prevent it from falling and airbags will take care of the controller.


​
We at CrazyEngineers are super-excited to see all of it in action. One thing is sure; the days of the wheelchair are numbered. What do you say?

On Jun 12, 2014 a young paraplegic Brazilian will get up from wheelchair, walk over to the midfield in a robotic exosuit and deliver the first kick of the FIFA 2014 World Cup.