The full wave rectifier is further classified into two:

Let us discuss it one by one

1. Here the AC input is applied through the transformer.

3. The load resistance RL is connected to the circuit.

1. When top of transformer is positive--------during first half cycle of the supply--------- Diode D1 positive----- D2 is Neagtive. Thus only D1 conducts .since it is forward biased. Thus current flows through the circuit, through RL and top of the secondary coil.

3. Peak Inverse Voltage: This is the maximum possible voltage across the diode when it is reverse Biased. 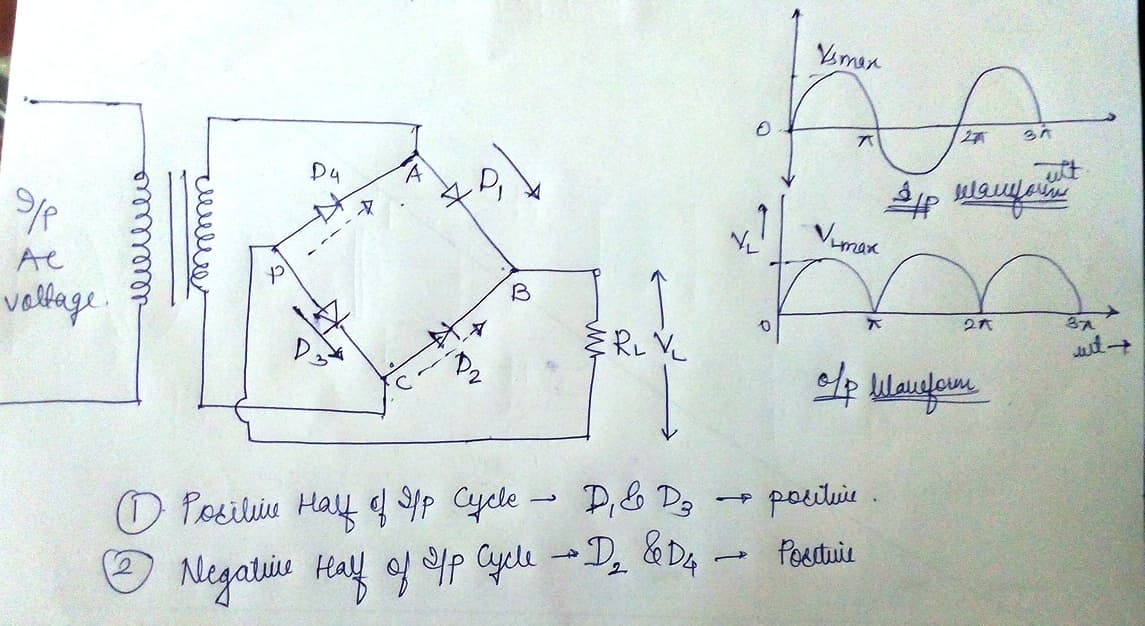 Operation of the Bridge Rectifier:

1. Top end of transformer positive---------first half of the cycle------D1 and D3 are positive means forward biased-----current flows through AB i.e. diode D1 ---- current enters at positive terminal of load and leaves at negative terminal ------ returns back through DC i.e. diode D3. During this time diode D2 and D4 are reversed biased and thus don’t conduct.

2. Bottom end of transformer positive---- second half of the cycle------ D2 and D4 are positive means forward biased----- Current flows through CB i.e. diode D2------current enters the load through positive terminal and leaves the negative terminal----- returns back through DA. During this time D1 and D3 are reversed biased.

3. Here the direction of current through RL remains the same during both the cycles.

Ankita Katdare
@Prajakta Kelapure Is a full wave bridge rectifier better then a full wave centre tap rectifier? If so, why?

Hi
Yes a FWBR is better than a Center tapped FWBR.
If you will consider it in terms of efficiency it won't be much significant but you can consider it.
Furthermost the little voltage drops across the center tapping diode will be a major concern in large scale application.
What I have found is the centre tap transformer is neither difficult to use nor costly. I think the main issue is with the PIV rating of the diodes used which is going to be twice as much higher in the case of centre tap transformer power supply.
Hope I helped.
Thank You
@Durgesh Srivastava • 25 Jan, 2020 • 1 like

A nasty campaign has been circulating on WhatsApp. It says that since 'Whatsapp' is not 'Indian', people should abandon it and use 'Telegram' which is 'Indian'. I ignored the message...
92.5k views
Read More →
Archives

Top movies every engineer should watch (and why)

Most engineers among us are also huge movie buffs. We have a great community here and we would love to read recommendations from fellow engineers. It'd be awesome to have...
4.5k views
Read More →
Archives

Project Abstract / Summary : Microcontroller based design, has acquired the Status of most happening field in electronics. This is highly specialized field that has the power of integrating thousands...
4.1k views
Read More →
Archives

Gionee India has done basking in the glory of its Elife S5.5 smartphone that became popular for its slogan 'More Than Slim'. Today it has launched a new Android Kitkat...
4.6k views
Read More →
Archives