@Ankita Katdare • 13 Sep, 2014 • 3 likes
Proudly being labeled as "the world’s thinnest tablet", the new Dell Venue 8 tablet is here to take the Android tablet segment by storm. Launched at the 22014 Intel Developers Conference (IDF 2014) in San Francisco on Tuesday, the Dell Venue 8 tablet is also said to have the world's best tablet display. The company has named the tablet as the Dell Venue 8 7000 Series, or to be specific - the Dell Venue 8 7840 Android tablet that features a 8.4-inch OLED touch screen, a form factor that was present in the Samsung Galaxy Tab S and much appreciated by the gadget-loving community. Well, we think that it's important to mention here that when we first witnessed the specs on the Galaxy Tab S, we knew that the new iPad had all reasons to feel threatened. With the latest Dell Venue 8 tablet, the competition is just about to get stiff & grow stronger. Let us take a look down the specifications list on the Dell Venue 8 7840 tablet to find out why it's the one Android tablet you have to feel excited about in 2014.

Starting with the tablet's shape, size and display - The Dell Venue 8 7840 is just 6 mm thick (that's skinnier than the iPhone 6 and beats Sony Xperia Z3 Tablet's 6.4 mm form factor) and they've packed the power of a quad-core 2.33GHz Intel Atom Z3580 processor inside that limited space. Inside the gunmetal-grey aluminum chassis, the tablet's 8.4 inch HD OLED Infinity Edge-to-Edge display sports a resolution of 2560 x 1600 pixels. Running on the latest Android 4.4 KitKat operating system, the Dell Venue 8 7840 tablet comes with 32 GB of storage that can be further expanded via a microSD card. 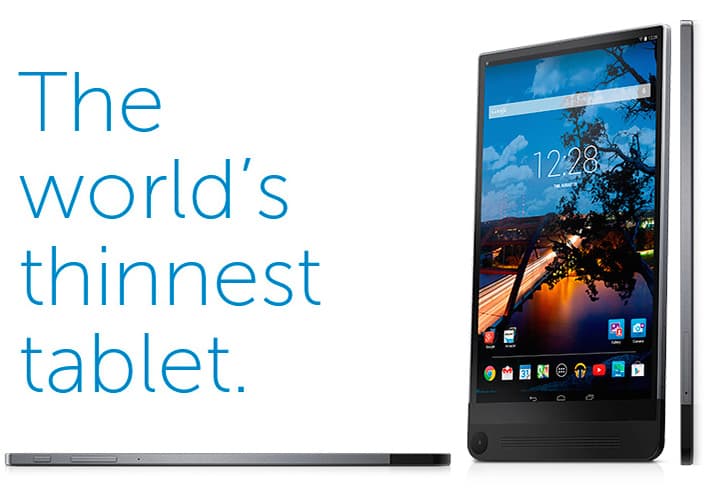 ​
Next in line of the features on Dell Venue 8 that would dazzle you is the Intel RealSense Snapshot Depth Camera - one of the hidden gems unveiled at the IDF 2014 event. Take a hold of this - The Dell Venue 8 7000 series tablet comes with 4 cameras. Three of these cameras are on the back, with one 8 megapixel snapper and the other two featuring Intel’s RealSense technology. It has been out in the open for quite some time now that Intel has been working on the RealSense family of software and depth cameras that enable real-time depth sensing. With this tablet's launch, users will be able to find out the distance of objects "inside the photos". That means you can measure the dimensions of a teapoy in your living room & triangulate the distance between its two legs just by capturing it's image in your Venue 8 tablet.

Moreover, users can perform tricks such as going back to their photo gallery and refocus to any point in the photo. Remember Lytro? And that's not all. The Dell tablet's RealSense camera also lets users capture 3D images. Yet another feature among the highlighted ones is the 'Dell Gallery', which according to the company's description automatically arranges all the photos into smart albums.


Michael Dell with the new Dell Venue 8 tablet at IDF 2014​
Apart from all that, the company has mentioned during the announcement that the tablet will be charged using a microUSB cable and has Wi-Fi connectivity support. The presence of an optional "Dell Cast Adapter" will let users project the tablet's display to the TV or a PC's monitor or simply let the device to be connected to a keyboard and a mouse.

If you've been enchanted by the tablet's specs so far, do take a look at the following video to gorge your eyes on the tablet's short demonstration -


​
Since the company hasn't revealed the official tech specs list for the Venue 8 tablet, crucial details such as the batter life or support for the Android OS upgrade are still not out. The exact launch date is not yet confirmed, but a U.S. launch is expected in later part of this year during the holidays. The tech enthusiast community is abuzz with the expected price for the new tablet, but with those specifications we can only say that it will fall into the higher budget category.

If you are excited about the new RealSense technology, you will be interested to know that Intel has confirmed the broad availability of the tech in a range of form factors from a variety of OEMs by 2015. In fact, software developers such as Autodesk, Dreamworks, FaceShift, Opera and 3D Systems among other are creating exciting new applications that go with RealSense.
​
What are your thoughts on the new Dell Venue 8 7000 series Android tablet in the market? Share them with us in comments below.

An unique feature of the 3D RealSense camera is the ability to conduct video-conferences with privacy. The camera lets you eliminate the background and therefore you can hide the fact that you're making the video call from your bedroom instead of your office. 😏 Sneaky!

Some sources have also confirmed that Dell will be launching a 10-inch version of the Dell Venus 8 7000 tablet featuring a detachable keyboard by 2015.
@prahu mac • 13 Sep, 2014 i think dell is onto some thing that could bring a radical transformation in tech world!!!!!!!
@Ankita Katdare • 13 Sep, 2014 Yep. The price will be quite the deciding factor for Dell Venue 8, as it is with most Android devices in market.
@Satya Swaroop Dash • 14 Sep, 2014 Its thin bezels make the display look much bigger than it is. I am not sure how the thin size will fare in terms of handling. Yes thinner iPads are good because they are big but smaller tablets being thin can cause problems.
@Anoop Kumar • 20 Sep, 2014 Amazing design.. +1 for Dell
Look at few of the camera feature

Best college for post graduation in Civil Engineering in India and Abroad?

Which is the best college for doing post graduation in India and also over the world?
2.1k views
Read More →
Archives

Spanish train maker Talgo has been given nod by the government to test run and demonstrate their lighter and faster trains on existing railway tracks in India. The Talgo trains...
2.3k views
Read More →
Archives

Alright, you've done fixing all the parts, writing code, getting all motors to work. The tougher part is ahead - naming your robot. Why not collect all the cool and...
3.8k views
Read More →
Archives

If you are a fan of open source platforms like Linux, then here might be a good news for you. UK based computer software company Canonical, announced yesterday on 6th...
2.9k views
Read More →
Channels
👨‍💻 Remote Jobs 🗞️ News 🚀 Founders Circuit 🗄️ Archives ✨ Newsletter 🕹️ Changelog
About · Privacy · Terms of Service · Contact Us · © 2005 - 2022 CrazyEngineers. All rights reserved.