@Ankita Katdare • 09 Jun, 2014
DARPA has a special program called the 'Z-MAN' that aims to develop biologically inspired climbing aids to enable war-fighters to scale vertical walls easily without the need of extra climbing equipment. Soldiers and military personnel might need to climb walls or mountains with full combat load without the availability of ropes or ladders. In comes the latest demonstration from DARPA that shows a human (weighing 218 pound and carrying 50 pound load) climbing a 25 feet high glass wall using just a pair of hand-held, gecko-inspired paddles. If you are thinking spiderman, this is far too cool to be even compared to that. This is real.

Draper Laboratory of Cambridge, Mass has developed the novel polymer microstructure technology used in these paddles. Taking inspiration from the nature i.e. the animal kingdom, the DARPA researchers found geckos to be the natural choice for their fame of being super-efficient climbers. The Department of Defense went back to the roots and studied the biology and physics in the climbing process of geckos and then reverse-engineered those dynamics for humans into an artificial system/


​
Geckos have the prowess to climb really smooth surfaces such as glass using its each limb that exerts adhesive pressures of 15-30 pounds per square inch. Using physical bond interactions between the spatulae (a bunch of microscopic hierarchical structure in each limb) the gecko is able to easy attach and remove its toes from the surface. Therefore, the challenge here was to fabricate an adhesive that worked just like the gecko toes, only for humans who weigh 75kgs on an average as opposed to geckos that weighs just 200 grams.

The DARPA engineering team had a big task of mimicking the dynamic climbing style of gecko at this larger scale and thus they had to create paddles capable of balancing sufficient adhesive forces in both the shear (parallel to the vertical surface) and normal (perpendicular to the vertical surface) directions. The gecko-inspired paddles had to be capable of remaining stuck to the surface without falling off while in the act of attaching and detaching the paddles with each movement. 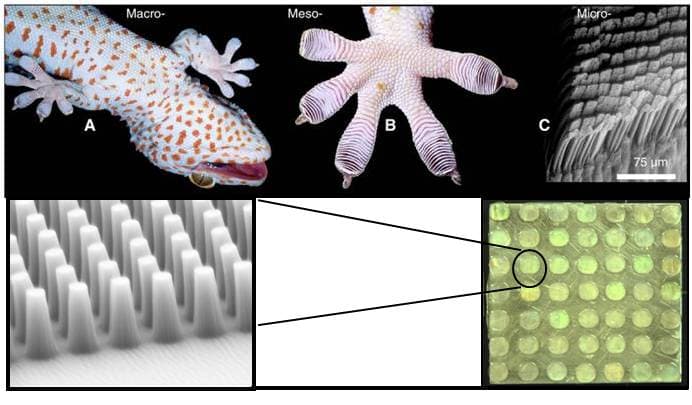 ​
“Geckskin” is therefore one of the outputs of the Z-Man program. It is a synthetically-fabricated reversible adhesive that can be used in the gecko foot to work over multiple length scales, from the macroscopic foot tendons to the microscopic setae and spatulae, to maximize reversible van der Waals interactions with the surface. The team was able to do a proof-of-concept demonstration of a 16-square-inch sheet of Geckskin adhering to a vertical glass wall while supporting a static load of up to 660 pounds too.

The team is right now busy testing the Gecko-inspired Paddles to work in various environments and surfaces. What are your thoughts on the new gloves? Share with us in comments below.