@Ankita Katdare • 10 Oct, 2014 • 4 likes
It's common knowledge that when Xiaomi Redmi 1S arrived in India, the news of its launch spread like wildfire. The flash sale model on Flipkart was a big hit and thousands of handsets got sold within 6-10 seconds. Amidst all the fanfare, the Chinese manufacturer is nothing short of super excited to bring its next hot-selling and much-awaited product in India. Yup, you heard it right. All the expectant eyes will soon be able to gorge on the Xiaomi Redmi Note smartphone priced in India at Rs. 9,999. The news came out when the folks over at Mi India put up a picture saying so on their official site.

Hugo Barra, the famous Brazilian computer scientist, who is currently the VP at Xiaomi International, had earlier stated that the company has plans to launch Redmi Note in India before Diwali 2014. And keeping up with the promise the phone is definitely arriving in time. Before the sales begin and Indian consumers start flooding the e-commerce portals, we thought we should shed some light on the most important features of the Xiaomi Redmi Note. So here goes -

Powered by a MTK 8-core Cortex-A7 processor available at 1.7GHz, the Redmi Note packs a ARM Mali-450 graphic unit bundled with 2GB RAM and 8 GB flash memory (32 GB microSD card support). Sporting a 5.5 inch IPS multi-touch display with a screen resolution of 1280x720 pixel, the Xiaomi Redmi Note's touchscreen has received a lot of positive responses so far. Judging from what we've seen on the Redmi 1S, we are expecting a really good viewing experience on the Redmi Note. The 178° IPS tech offers an uniform color consistency while viewing from most angles and with the GFF (Glass-Film-Film) architecture, pixels on the Redmi Note are positioned closer to the glass, allowing for a quite vibrant display of colors. 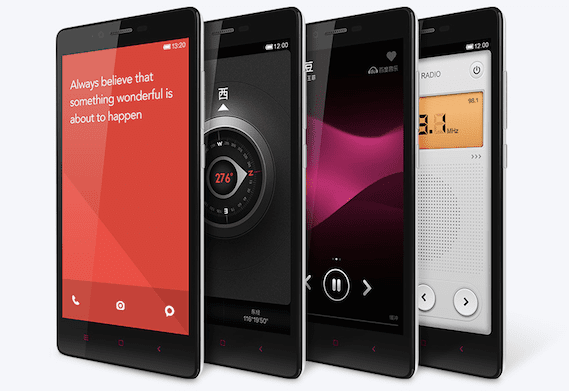 ​
Coming to the cameras - A 28 millimeter wide-angle lens and ƒ/2.2 aperture on the 13 megapixel rear camera speaks for some of the best quality photographs captured with the Redmi Note. A 5 megapixel camera on the front beats some of the best selfie cameras in the segment. The camera supports LED Flash, focus area, ISO and white balance. Users can record and playback 1080P (1920*1080) HD videos on the Redmi Note.

Equipped with 2G GSM, 3G, GPS+AGPS, Bluetooth BT4.0LE +BT3.0HS and WLAN support, the Redmi Note has all the sensors in place (including Gyroscope, Accelerometer, Proximity sensor and yes an Electronic compass). The phone's dimensions are set at - 9.45 mm thickness and 154 mm height + 78.7 mm width. If you open the phone's rear panel, the Redmi Note makes room for two SIM cards (one WCDMA slot and another GSM slot) alongside a 3100 mAh lithium-polymer battery. If the company's claims are to be believed, the battery offers a continuous 3G internal usage time of 14 hours and about 775 hours of standby.

Last but not the least, the phone will run on Android 4.4 KitKat OS with MIUI v5 on top. A lot has been said about the Xiaomi user interface and there have been mostly mixed reviews about how its look fair with the users. Soon to be available in 6 color variants (white, black, dark blue, light blue, pink and grey) in India, the Xiaomi Redmi Note might soon capture the attention of all those looking for a big screen and a powerful processor. That's all about the specifications and features we all ought to know before the big phablet enters Indian market.

Among its strongest competitors in India, Xiaomi Redmi Note will face war against Asus Zenfone 5 and Samsung Galaxy Note 3. What are your thoughts, opinions and expectations from Xiaomi in India? Share with us in comments below.
@Sarathkumar Chandrasekaran • 10 Oct, 2014 • 1 like Redime note definitely has edge and its previous success helps in creating a fan base and positive thoughts over Redime
@Ankita Katdare • 10 Oct, 2014 Yeah totally. The phone's quite effectively priced. I checked the reviews on the MI official forum, and the users look impressed with the phone's quality.
@Ankita Katdare • 11 Oct, 2014 Looks like engineers around don't seem eager for the launch of Xiaomi Redmi Note in India. 👀 The company might be anticipating a lot of Diwali gifts that people by for themselves.
@Prateek Roopra • 11 Oct, 2014 Are you sure it is releasing before Diwali? Economic Times says it will release this December
https://www.ibtimes.co.in/xiaomi-mi4...2015-redmi-note-by-december-end-report-611072
@Prateek Roopra • 11 Oct, 2014 Are you sure it's releasing before Diwali? Economic Times says it will release by December
https://www.ibtimes.co.in/xiaomi-mi4...2015-redmi-note-by-december-end-report-611072
@Divyaprakash KC • 11 Oct, 2014 Surely cheap and 'specy' ('specsy'? whatever) . I can imagine this phone will help to create a lot of 'fargo lorry front grill" type grins!
@Kaustubh Katdare • 11 Oct, 2014 I think the latest update hints at Redmi Note releasing sometime towards December. Also, Mi4 will release in January 2015.
@Ankita Katdare • 12 Oct, 2014 Here's something else I read about this phone today -
According to the some sources, Xiaomi Redmi Note will come in four storage variants – 16GB, 32GB, 64GB and 128GB.
Who here is wishing that they do away with the 'Flash Sale' model? Come on! The poor Flipkart guys have already had enough bashing.
@Ramani Aswath • 06 Mar, 2015 • 1 like My trusted 8 year old Nokia started to behave strangely. It was switching off completely in the middle of a call. No one wants to touch this for repairs. After losing two very important calls, I finally capitulated and went to the Airtel custcare and bought a Redminote 4G single sim phone.
While the shop assistant was fixing the card in and checking a call came in. Predictably from missus telling me to return home as I had gone leaving my keys behind and she could not leave the house till I came back.
I knew that the phone was alright.

My phone is smarter, while I am dumber and smarting with a 10K hole in the purse.
11.6k views

Can we apply to M.Tech without B.Tech degree?

A student just pinged me on Gmail asking if there is a procedure to apply to M.Tech without a B.Tech degree. I told her that I am not sure at...
4.2k views
Read More →
Archives

If you submit your sitemap in Google Webmasters and it gives the error - "Your Sitemap appears to be an HTML page. Please use a supported sitemap format instead." What...
4.3k views
Read More →
Archives

Hello everyone, I would like to have some information regarding summer training programmes in Cse after 4th sem. Is it necessary? or should we focus on learning languages? And if...
4.3k views
Read More →
Archives

Hi all, I'm new here. Found this awesome site through google. I would like to know anything and everything about rack and pinion especially the FORMULAS when designing them. I...
14.7k views
Read More →
Channels
👨‍💻 Remote Jobs 🗞️ News 🚀 Founders Circuit 🗄️ Archives ✨ Newsletter 🕹️ Changelog
About · Privacy · Terms of Service · Contact Us · © 2005 - 2022 CrazyEngineers. All rights reserved.