@Ankita Katdare • 25 Oct, 2015
A team of researchers from Berkeley Lab in the U.S. have come up with a new solution in the form of a 2D Laser that can take them a step closer to the creation of next-gen photonic and optoelectronic devices that are ultra-compact. They achieved a bright excitonic laser at visible light wavelengths by embedding a tungsten disulfide monolayer into a special microdisk resonator. This new kind of 2-D Laser lead the researchers to high-performance computing apps and optical communication via on-chip optoelectronics. The Berkeley Lab team has published a paper for their work in the journal 'Nature Photonics' with the title 'Monolayer excitonic laser'. 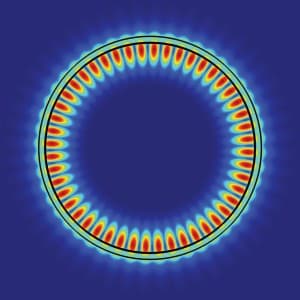 ​
The nanotechnology world has acknowledged that 2D transition metal dichalcogenides or TMDCs are the semiconductors offering high energy efficiency and the ability to conduct electrons faster than silicon.

Unlike the much-celebrated 2D semiconductor Graphene, TMDCs let their electrical conductance to be switched “on and off” due to the presence of natural bandgaps. Thus, TMDCs are more device ready than Graphene.

One of the most promising TMDCs is Tungsten disulfide in a single molecular layer, an element which wasn't used till date in lasers or for coherent light emission for the on-chip applications.

In Berkeley Lab's 2D excitonic laser, by placing the monolayer of tungsten disulfide between the two dielectric layers of a microdisk resonator creates the potential for ultralow-threshold lasing. The researchers created a “whispering gallery microcavity” for plasmons, electromagnetic waves that roll across the surfaces of metals. By adapting this microcavity technology from plasmons to excitons, the team achieved its goal.

The exciting new 2D laser technology can also find applications in encoding of digital information in the spin via Valleytronics, one of the promising alternatives to spintronics for quantum computing.

paper presentation based on microprocessor and microcontroller

i require a papers based on microcontroller and microprocessor.basically, i am searching for the paper on the topic "an detector which is used to find the human being buried under...
3.8k views
Read More →
Archives

CDAC 1st round of seat allocation all join here!

lets make this a default thread for 1st round discussion 😀 ok i'll start i got sunbeam pune for DAC and just wanna know who esle is coming to pune?
9.2k views
Read More →
Archives

The TCS Reference ID or Number seems to be one of the top issues faced TCS NextStep portal users. We have been constantly receiving complaints about incorrect reference ID, lost...
47k views
Read More →
Archives