Amit Jha · Jul 19, 2016
Rank C2 - EXPERT
Researchers at Harvard have created new ways to store energy from intermittent sources. Using a class of organic chemical compounds, they have devised a new setup to store electrical energy in large batteries. The team noticed that certain natural organic chemical compounds like ‘Quinones’ stores energy. These compounds perform several different functions, one of them being storing energy in plants and animals. The researchers implemented this property along with a food additive, ferrocyanide to develop a high capacity flow battery. A flow battery, also known as a redox flow battery, is a type of rechargeable battery which works on the principle of redox reaction. It contains chemical compounds in a dissolved state kept separated via a membrane. Ion exchange reaction that occurs within it provides the voltage as well as the recharging property to these batteries.

The Harvard team used quinone and ferrocyanide in their redox battery design and furnished remarkable outcomes. Not only were they successful in storing energy in them, but they could also design a non-toxic and less expensive electricity storage unit out of it.

Their work has recently been published in the journal Nature Energy and the team is receiving a great response for their outstanding work from different scientific communities. 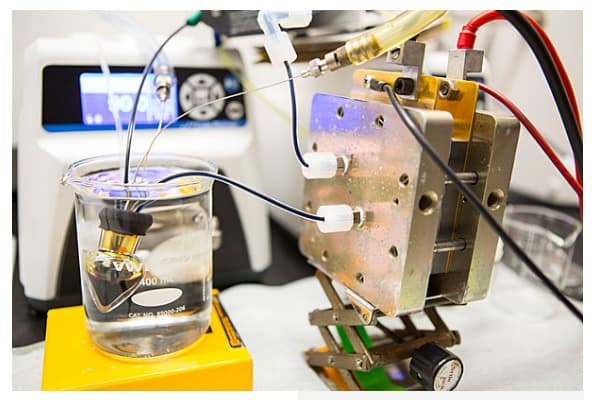 Prototype of their battery design
​
Michael J. Aziz, Roy Gordon, Alan Aspuru-Guzik and their team have first initiated the process by implementing quinones in their new battery design. Kaixiang Lin, one of the contributors and the first author of this research paper, now believes in trying different organic chemical compounds, which could lead to more efficient results.

Recently they have tried their experiments with Vitamin B2. Like quinone, Vitamin B2 also stores energy released from the food in animals. The key difference is only that Vitamin B2 contains Nitrogen atoms whereas Quinones contains Oxygen atoms. These atoms take part in giving and receiving electrons during the redox process. Using Vitamin B2 has provided for more stability and higher voltage output in the new batteries. Not only re the Vitamins easy to create but they are also very cheaply available.

As it turns out, our world could soon face an energy outage due to depletion of fossil fuels. Having such batteries could acts as the means for storing renewable energy resources and in turn foster sustainable development.

Watch the following video to see these flow batteries in action –