Chinmay Joshi · Apr 1, 2014
Rank D2 - MASTER
Apple is planning to make texting while walking safer by introducing a new Application called "Transparent Texting" which allows users to see what is in the front of their eyes on their mobile phone itself. This was revealed by a patent application filed by Apple in 2012 at the United States Patent and Trademark Office. The patent describes that with the help of the rear camera, the smartphone replaces the text's background by live video of whatever is in front of the user. This concept can be beneficial since many mobile users continuously text while walking, there's a high chance of tumbling over obstacles and in some cases it can lead to serious accidents.

Here, the user we be able to activate this feature of transparent texting by pressing a transparency button which will appear during a texting session which automatically starts the live video. The feature enables text bubbles appear above the video feed which would be opaque or semi-transparent. Interestingly, this concept was already implemented by another third party app called "Text and Walk". 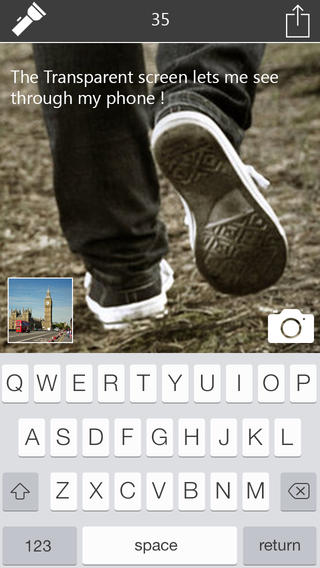 This technology can also be used for web browsers and ebooks where the text and messages would appear over the live video background. What do you think of this amazing concept? Share with us in your comments below.

[Prototype] · Apr 1, 2014
Rank B1 - LEADER
I don't think this will prove to be any useful. There are already 1000's of such apps for Android and I tried one. For me, I was still focused on texting/surfing rather than looking at the rest of screen which shows what's ahead of me. Don't know if that's just me though.

Anyway, I stopped taking out mobile while walking after an attempted snatch, which failed but gave me an important lesson... 😛
0 Likes

Sarathkumar Chandrasekaran · Apr 2, 2014
Rank A2 - PRO
Utter waste in night conditions where users may not be able to use during night time.
How does it will have impact on battery life?
0 Likes

[Prototype]
Anyway, I stopped taking out mobile while walking after an attempted snatch, which failed but gave me an important lesson... 😛

I think for attempted snatch, this is what is anyone's best bet -