Divyanshu Sharma · Jan 21, 2014
Rank D2 - MASTER
How about having a transparent display on the windshield of your car that displays the desired information while you driving? Sounds interesting. Researchers from various strata have been working on transparent displays for a long time now, but there hasn’t been any limit defying or breakthrough innovation as such. The existing transparent display systems are either based on mirror or a beam-splitter (that directs the rays into the eyes giving an illusion of the image being in air) or the organic light emitting diodes being embedded into the displays. These systems had prominent limitations: restricted angle of view that denies a user from viewing the display from different corners. Also the use of organic LEDs sacrifices the transparency of the display. Researchers at MIT have however come up with an innovation for the prospective transparent display systems. 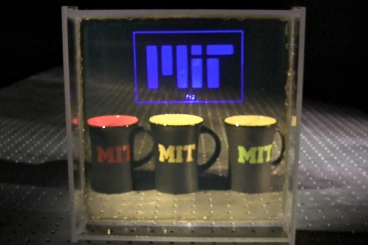 ​
MIT professor Marin Soljačić , John Joannopoulos, graduate student Chia Wei Hsu, and four others have in their research made use of nano-particles aided by thin plastic transparent coating. The nano-particles can be spread through a transparent material and can be tuned to scatter certain wavelengths, color or light, hence allowing the rest to pass through it. Professor Soljačić and his team used silver nano-particles of 60 nano meters across, that produces a blue image.However, it is also possible to produce full colored images using the same technique. According to Soljačić, “The glass will look almost perfectly transparent because most light is not of that precise wavelength that the nanoparticles are designed to scatter. That scattering allows the projected image to be seen in much the same way that smoke in the air can reveal the presence of a laser beam passing through it.”

The researchers insist that this demonstration is just a proof-of-concept (PoC), but it can be easily used to produce these displays on a commercial scale due to the commercial availability of the silver nano-particles used. The team has been able to garner praise for its efforts and innovation, however, it remains to be seen if this PoC can actually be conceptualized into a commercially viable transparent display screens.