Kaustubh Katdare · Apr 23, 2014
Rank A1 - PRO
It all started with USB (3.0) guys upgrading the speeds to 5 Gbps and the Thunderbolt folks introducing the game-changer at 10 Gb/s. The latest Thunderbolt 2 offers 20 Gb/s data transfer speed (that's quite fast, you see!) and a recent update allows 10 Gbps Ethernet over the Thunderbolt platform. But the game's not over yet. According to VR-Zone (Chinese), Intel is pepping up the game with 40Gbps throughput in their upcoming Thunderbolt 3. If those numbers don't make any sense to you, don't worry. The Thunderbolt 3 controller chip will be capable of delivering 4K video to two monitor simultaneously allowing the professionals to work on multiple 4K displays at once, through a single machine. 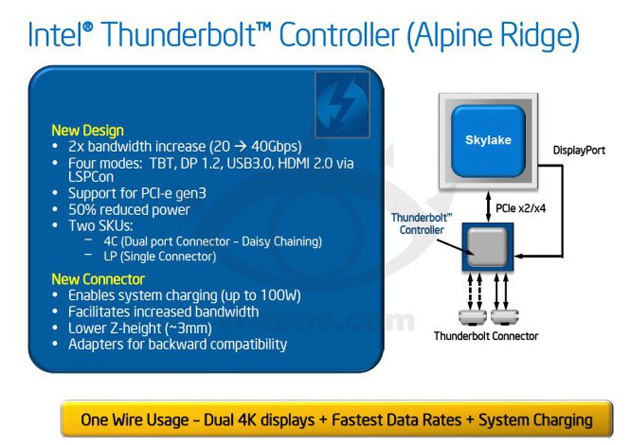 ​
The leaked screenshot shows Intel's plan to use the new Skylake processor in the controller, codenamed Alpine Ridge. The Thunderbolt 3 connector is expected to be smaller than the current ones, which means an adapter will have to be used to use it with the older gadgets. The (unconfirmed) specifications of Thunderbolt 3 indicate that it will be possible to charge devices at 100 W while cutting the power consumption by as much as 50%. The new Thunderbolt will also support PCIe-3 standard.

Keep in mind that it's just a leak and the final specs may be completely different. All of us will have to wait until mid-2015 to find out the truth.

Anoop Mathew · Apr 27, 2014
Rank A3 - PRO
This is good! In short, we'll get to use less power but do faster processing when this piece of equipment comes to life. Hopefully, we'll have more 4K displays by then!