Kaustubh Katdare · Jul 31, 2015
Rank A1 - PRO
The engineers from Harvard University and the Seoul National University have developed a tiny robot that can jump right from the surface of water. This small robot is capable of mimicking the water striders (check out the video below). The research team described their innovation in robotics in the Science Magazine. The team studied semi-aquatic arthropods and found that the water striders use special technique to be able to jump right on the surface of water without causing splash. 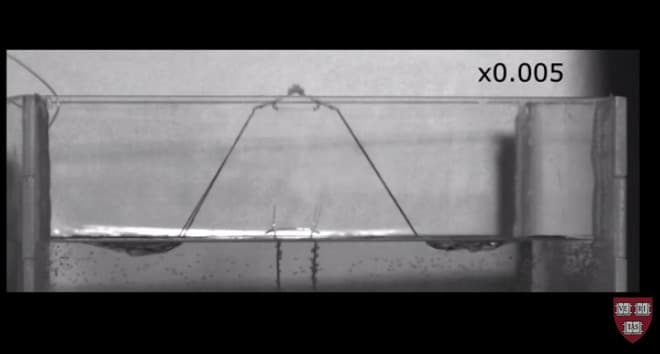 ​
Researchers found out that the water striders turn the curved ends of their legs inwards at a low descending velocity with force just short of required (144 millinewtons/m) to break the water surface. The team then built a robot weighing 68 mg robotic insect to demonstrate that it can jump on the surface of water using maximum momentum transfer. The robot, which is about the size of a thumb can jump about 5.5" in air right from the surface of water, without breaking water surface.

Researchers believe that such robots could ultimately be used in search and rescue operations; for example to find the victims in floods. Do check out the video below and share your thoughts with us.