Ankita Katdare · Jun 7, 2015
Rank A1 - PRO
The world of thermometers is being rapidly researched on and there are scientists dedicatedly working on bettering the technology. In line with that, a team from University of Nottingham collaborated with a team from a university in Barcelona to build the world's smallest thermometer that is now being called the most accurate in the world. Dr. Gerardo Adesso (Associate Professor, Faculty of Science) and his team of mathematicians got together to build the new quantum thermometer that can detect the smallest of fluctuations in temperature at nanoscale in small elements such as a bio cell. Inventions such as this one are the key towards coming up with better ways of medical diagnosis and subsequent treatment.

Anna Sanpera and her colleagues at Barcelona State University worked with Nottingham mathematicians to maximize the heat capacity mathematically to derive a formula for max sensitivity in a nanoscale thermometer depending upon it's energy level configuration and the number of available quantum states. Their results show that the most precise thermometer is a system with two energy levels. 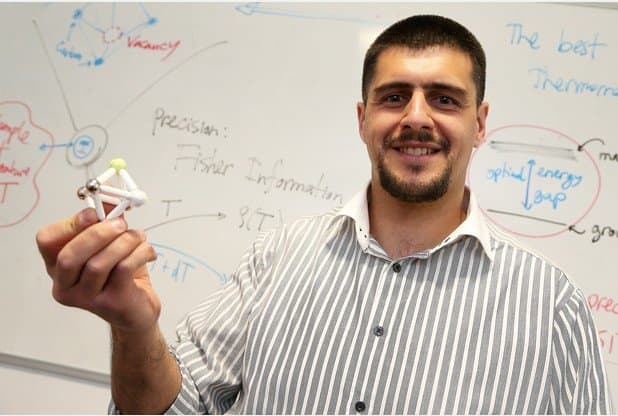 Prof. Gerardo Adesso​
Speaking of thermometers, we have covered the world's most sensitive thermometer designed and developed by a team of researchers at University of Adelaide's Institute for Photonics and Advanced Sensing (IPAS). That thermometer can measure temperature with a precision of 30 billionths of a degree at room temperature.

Recently in news was a 'wearable thermometer' developed by the folks at TempTraq. It is a credit card-sized flexible digital device that can be stuck to the underarm of a kids to monitor his fever all day long using companion smartphone app on any Android and iOS smartphone.

The research in thermometers hint at the giant leap forward in the field of physics and chemistry as well. At lower temperature in a laboratory environment, these can prove much fruitful for scientist's aid in research work.

Professor Adesso from Nottingham University believes that his thermometer is as accurate as the laws of physics allow it to be and it could help detect signs of cancer earlier as well as lead to improvement in production of drugs used to treat diseases. The field of cell biology can hugely benefit from such pathbreaking technology.

What are your thoughts about the world's smallest thermometer? Share with us in comments below.

Sarathkumar Chandrasekaran · Jun 7, 2015
Rank A2 - PRO
Thats surely a great achievement by those engineers. It still has a lot of benefits when it rolls on commercial basis and as said, Medical field and scientists have advantage over others
0 Likes