@Ankita Katdare • 21 Feb, 2014 • 4 likes
Thermoelectric materials that bank on temperature difference to create electric potential may soon get improved, thanks to the research work on nanoscale pillars by a team from University of Colorado Boulder. By improving the rate of conversion of heat into electricity, the scientists will be able to impact many segments such as solar panels or cooling equipments. On a larger scale, when put in use efficient thermoelectric materials can prevent the wastage of heat generated at power plants by converting it all into electricity. Discovered in 1800s, thermoelectric effect has undergone significant positive changes with the advent of nanotechnology in recent times. With the new discovery pioneered by Mahmoud Hussein, an assistant professor of aerospace engineering sciences at the University, a technique that uses an array of nanoscale pillars built on top of a sheet of thermoelectric material like silicon has been employed to develop what they call a "nanophononic metamaterial".

Thermoelectric materials are used to either create electricity from hear (used in solar-powered devices) or by consuming electricity to be converted into requisite temperature (used in refrigeration devices). The technology brings in a challenge of dissipation, which means when temperature difference creates an electric potential, the temperature difference itself begins to dissipate that weakens the current it created. Till about two decades back, to tackle this problem, researchers were in search of materials with intrinsic properties that allowed electricity to flow more easily than heat. With nanotechnology, we changed all that. 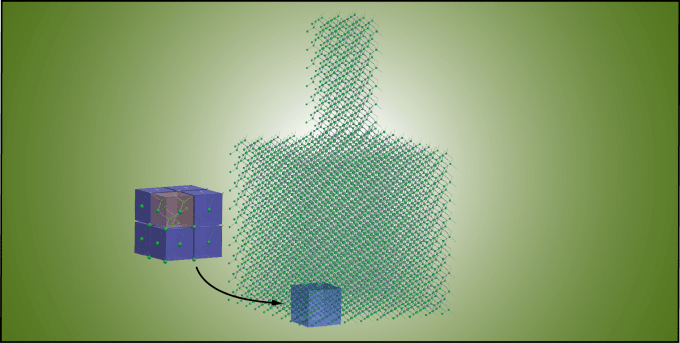 An atomic-scale model of a nanophononic metamaterial. The vibrations caused by the pillar slow down the horizontal flow of heat through the thin film.​
To better the techniques in use today, Hussein and PhD student Bruce Davis demonstrated the use of nanophononic metamaterial to carry heat through the material as a series of vibrations, known as phonons. Moving further, they made use of a computer model to show how flow of heat gets slowed down as the vibrations of the pillars interact with the vibrations of the phonons. According to their estimates, this technology should reduce the heat flow through a material by half or significantly even more.

Funded by the National Science Foundation, the research at the university is now at full swing and the team is working on fabricating the nano pillars to test their idea in the lab. What do you think about the use of nanotech in thermoelectric materials? Will it have wide applications in upcoming solar-powered device industry? Share your thoughts with us in comments below.

Investigation: How to weld small pieces of metal in a prison (Escape From Alcatraz)

You see, it was a cool movie I saw on TV when I was a little kid (Escape From Alcatraz). It had a really interesting scene in it: Frank (Clint...
5.1k views
Read More →
Archives

Born and brought up in Kerala in a family that runs educational institutions, Sandeep Nambiar grew up in an environment where education was given a lot of importance. After completing...
3.9k views
Read More →
Archives

In short time and with great determination, can we increase our aptitude skills? If so..,suggest some measures? It would be better if the suggestion is very clear not just stating...
12.5k views
Read More →
Channels
👨‍💻 Remote Jobs 🗞️ News 🚀 Founders Circuit 🗄️ Archives ✨ Newsletter 🕹️ Changelog
About · Privacy · Terms of Service · Contact Us · © 2005 - 2022 CrazyEngineers. All rights reserved.