Thanks To NCSU Researchers, Body Heat Could Soon Be Used To Power Smart Wearables

Debasmita Banerjee · Sep 13, 2016
Rank B3 - LEADER
Engineering is fun when you know how to get the trick done with tech. While some thought experiments spookily convince people to appreciate their beauties, application-based research highlights day to day restrictions and convert them to pure solutions you can enjoy without a doubt. A group of researchers from North Carolina State University has developed a technology which can simply lend your body heat to convert it into electricity that can drive your smart wears.

Light in weight, the tool complies with the shape of the body and justifies the performance with respect to its input. Kudos to the team, they have come across an optimal spot for heat harvesting from a body. Professor Daryoosh Vashaee of electrical and computer engineering at North Carolina State University has implied that the tool in question, technically - wearable thermoelectric generators (TEGs) generate electricity via manipulating the difference in temperature between a human body and the ambient air. 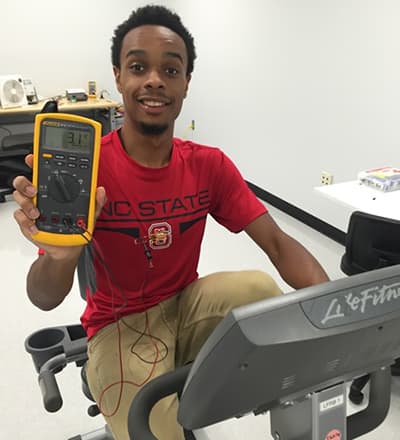 That's Ammeter reading, the process is working!
​
Referencing to the source, previous methods were depicted as heavy weighted. Plus the electricity generated in the process was not more than one microwatt per centimeter squared whereas the new design could harness 20 microwatts per cm^2 without adding bulky constructions with the system. The research item is tiny and the core a thermally conductive material is placed on the top of a marked skin-point and spreads out the heat. A polymer overlay, on the contrary, stops the heat dissipation and restricts the heat to flow through only a centrally-placed TEG. The excess heat, not converted into electricity is channeled through an outer line made of a thermally conducting material which readily dissipates the heat.

The entire system is as thin as 2 mm and the prototype TEG used to validate the experiment is 1 centimeter squared which could be stretched further according to the requirements. The research team inferred that the upper arm optimally suits the criteria for heat harvesting. Although the wrist dissipates more energy the irregular shape of the wrist restricts intimacy between the TEG band and the skin. Experiments suggest that if a person is wearing the device on his chest (should be above a shirt) then the process gets hindered as the shirt comes in the way whereas for someone wearing T-shirt, the efficiency increases and gives electricity between 6 microwatts to 15 microwatts.

Professor Vashee implied that the system could lead to device health monitoring wearable technology that could self-sustain and work in a cyclic process. In that way, these devices get free of batteries and offer a significant freedom to the new generation electronic gadgets. The research named as the “Wearable thermoelectric generators for human body heat harvesting,” has been published in the “Applied Energy” journal.