@Ankita Katdare • 24 Apr, 2014
Suzuki Motorcycles India has now opened pre-booking for its latest scooter in the market called 'Suzuki Let's'. The scooter was globally unveiled at the Delhi Auto Expo 2014 along side Suzuki Gixxer bike in January. Though the company hasn't revealed an official release date, the Suzuki Let's scooter has got a price in India tag of Rs. 47,000 (ex-showroom Mumbai). Interested parties can pre-book the scooter from their nearest Suzuki dealerships for Rs. 1,000. Ready to take on the newly introduced Yamaha Ray, TVS Jupiter, Honda Activa i and probably the upcoming TVS Scooty Zest two-wheelers, the Suzuki Let's scooter deserves a good look at its specifications and features from consumers looking to buy a new one for the family in 2014.

Suzuki has shared that they have built the Let's scooter from ground up and it is all new inside and outside. Powered by a 112.8cc engine that delivers 8.7PS max power at 7500rpm and a peak torque rating of 9Nm at 5500rpm, the Suzuki Let's claims a fuel efficiency of 63 kmpl (credit given to the SEP or Suzuki Eco Performance technology). It has to be noted here that - the Suzuki Let's is different than the company's previous models such as Suzuki Access 125 and Swish 125 with respect to the looks and features it offers. The new two-wheeler wants to target the young ladies and college goers alike. 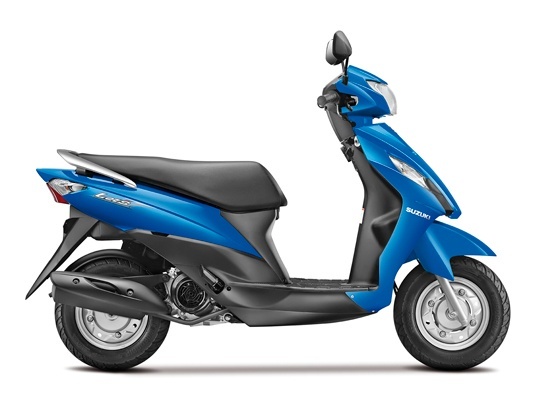 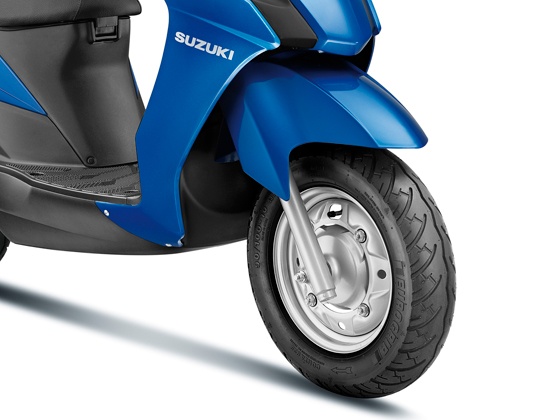 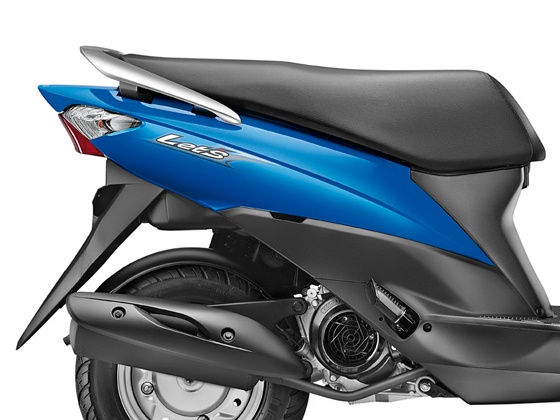 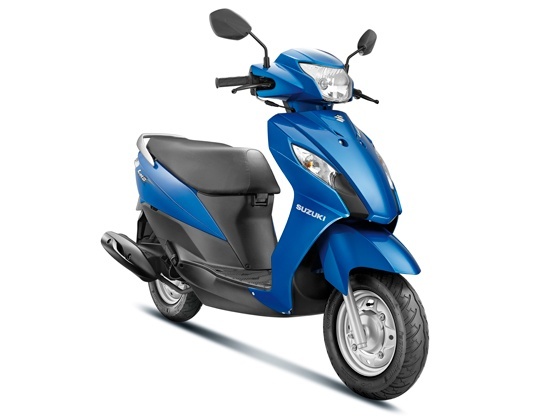 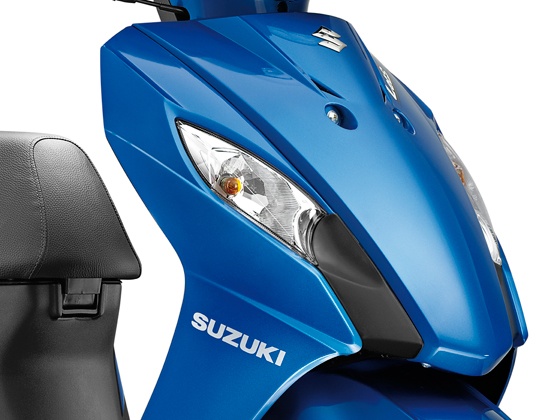 ​
On the looks category, the Suzuki Let's scooter fairs well with its mid-size proportions and deeply cut silhouettes on the front apron. As you can see from the pictures above, there's a clear lens and halogen-equipped headlamp on the front. Placed in the centre under the handle is a single bag hook which gives the rider quick access for mounting baggages. Under the convenience zone, we found that the underseat storage is quite adequate. The front and rear suspension are both coil spring and oil damped, while the front is telescopic, the rear is swing arm type. The scooter does feature 90/90x10 tubeless tyres.

That's all about the features and specifications of the all-new Suzuki Let's scooter. How would you like to ride it on the Indian roads? Share with us in comments below.

Source: Zigwheels
@Ankita Katdare • 24 Apr, 2014 Inviting comments from @Satya Swaroop Dash, @SarathKumar Chandrasekaran, @LittleNut, @micheal john, @Rajni Jain @Deepika Bansal @CIVILPRINCESS @cooltwins @Pri Pengonda
@Sarathkumar Chandrasekaran • 24 Apr, 2014 Side stand alarm seems to be quite interesting as we had lot discussed on this topic. Design was anazing and definitely a good competer for ray and activa.
@zaveri • 24 Apr, 2014 • 1 like What many people in India really want in a scooter, is the machine's capacity to carry heavy loads, and so far activa has been the only vehicle in the market to do that, without giving much trouble, and hence its popularity. even suzuki access and honda aviator, could not beat activa in this aspect.

lets see what this Let can do
@Rajni Jain • 24 Apr, 2014 • 1 like As Honda Activa is the largest selling scooter of India and known for reliability, its very tough for Let's to beat it in market. 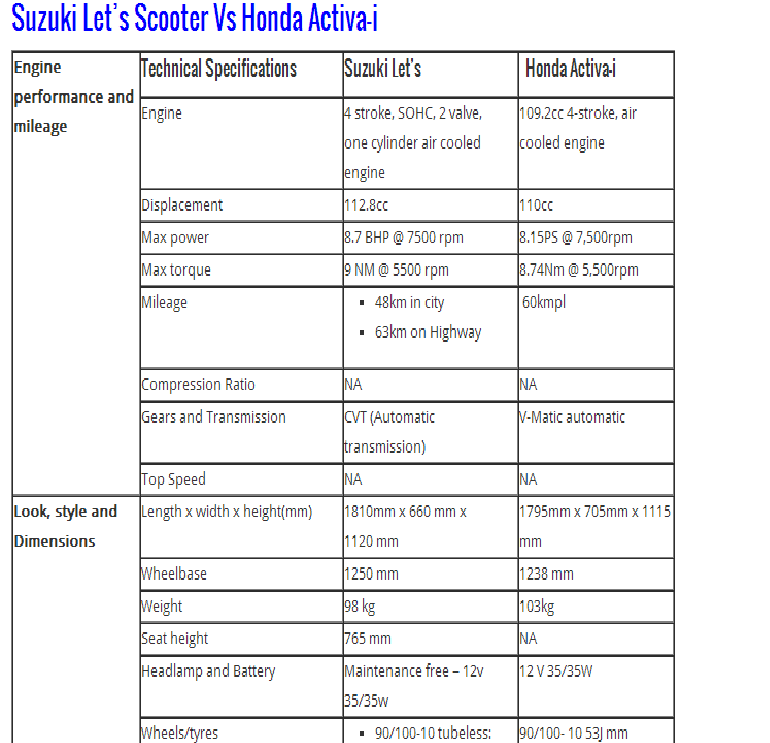 This comparison shows that there is not much difference in specs.Let's see what Let's do in the Indian Market.
@Vikram S Bargah • 24 Apr, 2014 • 1 like Technical specifications are pretty much similar to other scooters available in market.the point of attraction are :
Its fuel efficiency: 63 km/ltr (Company Claim) we may expect it to 55km/ltr on road.

I don't think most of Indian customers prefer disc brake as the options. Instead they try to have it as simple as possible.

P.S. : I Think Indian customer scooter preference are as

Lets seems to be a good choice (If they can think other than ACTIVA)
The scooter segment is soon going to be Honda Vs Suzuki .
@zaveri • 24 Apr, 2014 @Rajni Jain

Hey i meant the regular activa. Activa-i is just another flimsy rip-off the scooty range.
@vishal Lokhande • 29 Apr, 2014 seems good option for under 50k scooter , bcoz in market such specification goes slightly over budget and this will be answer for that..👍
17.5k views

What infrastructure, technology stack does WhatsApp use?

Curious to know what infrastructure and technology stack does WhatsApp use. I'm aware that they've been acquired by Facebook but I doubt they've already ported all of their code to...
7.8k views
Read More →
Archives

Got a job offer from Mphasis but there is some problem. Please help!

I am currently in my last (8th) semester of B.Tech. and I have been selected by Mphasis as software trainee on my campus placement. The joining could be anytime between...
4k views
Read More →
Archives

Which is better and why Electronics Engineering or Computers?

Which is Better and why Electronics Engi or Computer ? on basis of job and packages !!
9.6k views
Read More →
Archives

CrazyEngineers Grand Giveaway - DO NOT MISS IT!